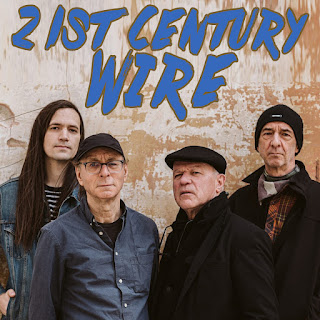 Few bands manage to pull off a respectable second act... yet first-wave punk pioneers Wire have unexpectedly managed a third act full of terrific (or at least surprisingly solid) music.

Yet after a few years of solo albums and side projects, the original quartet returned with 1987's The Ideal Copy, a surprisingly solid record which left the original landmarks behind, opting for a more electronics-infused sound that owed as much to New Order as to the band's punk roots. The 80s/90s iteration of the band managed a few other solid singles, though the albums saw diminishing returns, and original drummer Robert Grey (a.k.a. Robert Gotobed) quit amidst the band's increasing reliance on electronics.

All was silent after 1991's The First Letter (I don't think I ever even bought it), but the original band, with Grey, resurfaced for a pair of 2002 EPs (collected the next year as Send). I'm not a huge fan of the heavy, industrial sound that dominated this initial phase of their latest reemergence, though "The Art Of Stopping" was as frenetic and exciting as anything the band's ever done. But over the ensuing half-dozen-plus albums (the most recent was 2020's Mind Hive), the longest of any incarnation of the band (albeit with original guitarist Bruce Gilbert calling it a day in 2004), they carved out a comfortable niche, a blend of more abrasive, post-industrial grooves and the catchier, Newman-driven pop-punk tracks.

Now, let's be honest, I wouldn't call anything over the past 20 years as essential as that original 70s run--don't dive in expecting to hear another "Outdoor Miner"--but there have been plenty of winning songs, and at least one LP verging into greatness territory (2015's Wire, the band presumably also recognizing it as a stand-out by making it their first eponymous record some 40 years into their existence).

I've culled the catchier tracks into a handy 80-minute package. Probably all the latter-day Wire one really needs, but for a band on its third wind, it's still pretty damn impressive.