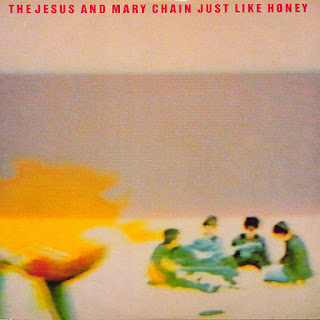 On paper, there's nothing terribly groundbreaking about the Jesus And Mary Chain's "Just Like Honey." It's deliberately retro, joining Brian Wilson by copping the drum intro from the Ronettes' "Be My Baby"; followed by a simple 3-chord pop tune, a post-punk updating of Phil Spector's Wall of Sound and the Beach Boys' early pop--much like the Ramones had done a decade earlier, but stripped of the punk fury and ratcheted down to half-speed.

But the sonics of the song really felt like a revolution. When the band's debut, Psychocandy, landed at the college station in 1985, and we first dropped the needle on that opening track, we knew it was a monster. The band took the Spector blueprint and ran it through a thick, hazy gauze of feedback and reverb. The snare sounded like it was covered in steel ball-bearings; the guitars were filtered through shards of broken glass; the vocals wafted in from a hundred miles away, doused in layers of echo to prevent them from dissipating entirely. It was a dark and joyous little pop song that sounded both immediately familiar, a logical successor to both the Spector bands and Echo & The Bunnymen, and unlike anything we'd ever heard before.

As a stand-alone song, it's merely perfect; but the influence of the song pervades half of the music I've been listening to for the past 37 years, from the 90s shoegaze bands to respectful acolytes like the Raveonettes, right up to yesterday's outstanding new release from Canadian indie-pop band Alvvays (whose 2017 song "Lollipop" name-checked Jesus/MC frontman Jim Reid).

The enduring power of the track--performed live earlier this year with Phoebe Bridgers guesting: