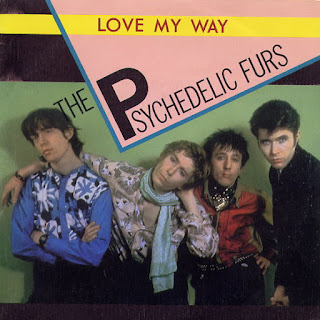 Another one where my undying love for the song is as much a result of teenage associations as it is a recognition of the song's stand-alone merits.

Don't get me wrong, it's a great song. One of the most perfect encapsulations of the new wave era, expertly combining distinctive synths and a haunting atmospherics but never straying far from infectious, sing-along pop. Richard Butler tames his sandpaper rasp into more of a Bowie-esque croon, making it more inviting than some of the band's more abrasive tracks. But ultimately it's one of those rare songs where, if you try to compare it to something that came out before, you come up empty-handed. Yeah, you can point to influences in Roxy Music, Bowie, Joy Division, the Cure... but frankly, I don't think there's anything else that sounds remotely like it.

But, again, for me it's at least as much about the nostalgia factor. Another one that landed smack dab in the middle of high school, and it's impossible to overstate how much the music we hear at that point in our lives shapes our very existence. 40 years later, and every time I hear this I'm sitting in Cecile's living room spinning her big sister's vinyl, or watching Valley Girl--damn, that soundtrack, so perfect--with Patty in the long-since-abandoned, architecturally trippy Edens movie theater in Northbrook, Illinois.