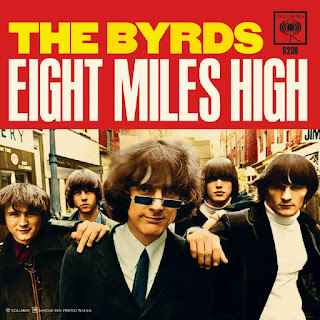 Another one that feels kinda obligatory, like you HAVE to have "Eight Miles High" somewhere near the top of your list. And frankly, I tend to listen to later Byrds more often than the earlier stuff, particularly Notorious Byrd Brothers and Untitled. But there's no denying it's a monster of a song, and one that really hooked me on the band as a kid. I'd probably heard "Mr. Tambourine Man" and "Turn! Turn! Turn!" on the radio at some point, and a cassette copy of The Byrds' Greatest Hits was one of my earliest purchases as a pre-teen.

And while I loved every minute of that hits collection--it's still pretty damn perfect--"Eight Miles High" felt different. From the weird, free jazz and raga-influenced guitar solos to the uncanny harmonies to the thundering bass, it felt otherworldly, one of the few songs I'd heard up to that point as complex and scary and unexpected as the Beatles. And it still has that slightly-unsettling vibe to this day. I remember my college band tried playing it, and it was pretty tough to pull off; of course, this was also before you could pull up lyrics online, and we had a lot of the lyrics totally wrong, which made it sound that much stranger.

Late-period Byrds dropped most of the early stuff from their live set, but they turned "Eight Miles High" into an extended (often lyrics-free) jam, a showcase for some unbelievable chops.When I got to college and started getting into Hüsker Dü, someone played me their cover version, and I have to admit I found it pretty sacrilegious. It's grown on me, but as much as I love the Huskers, Bob Mould's throat-shredding wail still has me longing for the original. Still, it was one of the first songs I heard early in my college radio days that opened me up to killing my idols and embracing a less reverent approach to the classic rock standards of my childhood.
Robyn Hitchcock's version is a bit more to my liking, suitably reverent but still adding a fresh spin.
File Under: 1960s All My Favorite Songs Byrds Classic Rock Husker Du Hüsker Dü Psychedelia Robyn Hitchcock