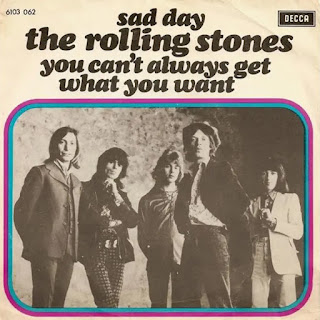 I realize some Stones fans blanch at the song's excesses, but for me, "You Can't Always Get What You Want" was the band's first true epic, the song that confirmed that, like the Beatles, they could operate in a sphere far beyond mere mortals.

Yes, by the time of 1969's Let It Bleed--the first of their incomparable Mick Taylor era--the Stones already had an astounding run of perfect singles. And the (underrated) psychedelic lark Satanic Majesties Request showed the band pushing at the boundaries of blues/R&B-based pop, with more success than they're given credit for. And even the stripped-down Beggars Banquet offered further expansion of the rock template with "Sympathy For The Devil."

But "Want" went all in... from the operatic choir that opens the track; to the gradually building density of the piece, rising from Banquet-reminiscent acoustic number to rousing band performance; before exploding into a rollicking, celebratory, extended coda, that choir rejoining the band, the Stones latching onto the double-length opus of "Hey Jude" and doubling down. It's an odd line-up for the band: Taylor had yet to replace Brian Jones, leaving Keef to handle all the guitars; while it's another example of a messy, complicated tune that Charlie couldn't quite figure out on drums, leaving producer Jimmy Miller to handle the kit (as was the case, coincidentally or not, on the prior Stones appearance on this list). But the configuration of musicians in the studio--especially Miller, with Al Kooper on keys--pulled it all off, beautifully.

I'll concede that the lyrics can be a bit iffy, some stilted and awkward forced rhymes, but there's no denying that they make a lasting impression. And the forcefulness of the performance, from the initial gentility to the sweeping close, could carry pretty much anything Jagger splayed out.

Mick Taylor's delirious soloing on the live version does make me wish they'd had him around for the record, however:BTW, I know the movie is divisive, but the Big Chill's employment of the song for the funeral scene is one of my favorite uses of music in film:
File Under: 1960s All My Favorite Songs Classic Rock Rolling Stones