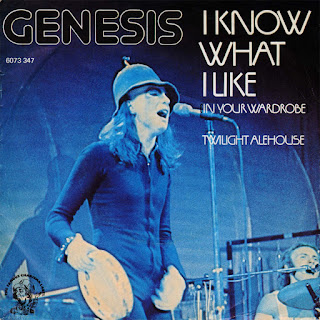 An early instigator of my long-running, on-again off-again relationship with prog rock. I was already somewhat familiar with Peter Gabriel as a solo artist, and Phil Collins-helmed Genesis, before I discovered their shared past (ah, life as a kid in the pre-internet age, when an encyclopedic knowledge of music history wasn't at your fingertips). But once I discovered Gabriel-era Genesis, I was immediately hooked. 1971's Nursery Cryme totally floored me (as explained in my book), and its opening track "The Musical Box" has already made its appearance here.

But it was 1973's Selling England By The Pound which became my favorite Genesis album, and while I adore pretty much every note of it, "I Know What I Like (In Your Wardrobe)" still manages to stand out. It's a bit more pop-friendly than the longer, classically-influenced pieces, with a hummable, keyboard-driven hook, making it an attractive entry point to the band. Plus something about Gabriel's vocals, and especially his spoken-work introduction and closing to the song, has always struck me as otherworldly. "When the sun beats down and I lie on the bench, I can always hear them talk. Me, I'm just a lawnmower, you can tell me by the way I walk." It's a bit of nonsense, but nails down the sweet, mystical charm of the tune.

Gabriel as the oddball mime, live in '73:One of the Gabriel-years tunes that best survived the transition to the Collins era:
File Under: 1970s All My Favorite Songs Classic Rock Genesis Peter Gabriel Phil Collins Progressive