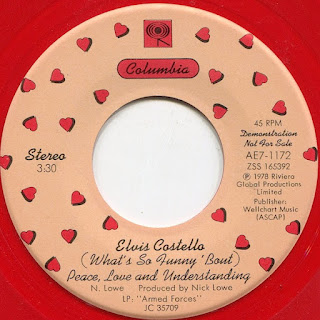 The first cover song to hit my Top 1000, "(What's So Funny 'Bout) Peace, Love and Understanding" is the rare instance where a cover surpasses the original. Which is no slight to Nick Lowe, who wrote and performed the song with his original band Brinsley Schwarz. The Brinsleys' version is already great, a rare slab of shimmering power pop amongst the band's more traditional R&B-tinged pub rock; the jangly three-chord pop tune stood as an introduction to the wickedly tuneful indie-pop that would feature in Lowe's early solo work.
Elvis originally recorded his version in 1979 for the b-side of a Nick Lowe single, back when Lowe was producing Costello's albums; the song was later tacked on at the end of the US version of Costello's Armed Forces LP, which is where most of us first heard it. Elvis leaves the basic structure and lyrics of the song intact--not much there to improve upon, though he wisely jettisons Lowe's cheesy spoken-word bridge--but gives it a distinctive spin. Lowe's exuberant optimism is replaced by Costello's far more bitter and angry intonation, the lyrics all but spit out of his mouth. In his take, the post-hippie we-can-fix-this vibe of the original comes out more like a what's-wrong-with-you-fuckers? exhortation.
As much as Elvis' delivery, it's the Attractions' performance that redefines the song. Pete Thomas' drums are both frenetic and tightly controlled, that ridiculous echoing tom-roll immediately identifiable. But the whole band is on fire, an intense 3-minute blast that ably bridges the punk era to a return to good ol' rock & roll in much the same way as the Clash's London Calling from later that same year.Compare & contrast:Here's Brinsley Schwarz playing it live in '75:...and Elvis live in 2012: