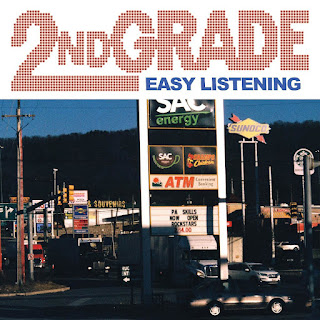 Damn, the late summer/early fall season is turning into a feast of excellent new releases. Add the new one from Philadelphia indie pop act 2nd Grade to the pile!

Their 2020 debut long-player, Hit To Hit, was a throwback to classic Guided By Voices, but with a much greater debt to power pop (and even bubblegum)--24 rapid-fire, lo-fi-ish nuggets, often taking a minute or less to lay down a clever lyric and killer hook and move on to the next one. It was a mix of easy smiles and castaways, with a few absolutely brilliant little gems like "When You Were My Sharona" to elevate the overall package.

The follow-up sees the band stretching out, but just a little. A mere 16 songs, with three of them daring to reach the 3-minute mark, but still covering a lot of ground in barely half an hour. And like the last one, amongst the lo-fi snippets are some fully-realized power pop songs, the band showing reverence to the Sweets (both Matthew and the 70s pop-glam superstars), Big Star and Cheap Trick, with shades of personal favorites like thoughtful noise-pop act Oranger (knowingly or not).

The album opens with a winning 1-2-3 punch: "Cover Of Rolling Stone" is a minute-long declaration of purpose, a quick hit of gleefully unpolished bubblegum; "Strung Out On You" offers cleaner beach-friendly Teenage Fanclub-reminiscent jangle but no less immediacy; and "Hung Up" is fully-realized power pop. From there they bounce around among wispier ballads, rougher GbV-tinged snippets, and stand-out totally-ready-for-prime-time singles like the tongue-in-cheek anti-youth "Teenage Overpopulation."

It's a blast of fun, over before you know it and ready to be rewound for a second listen to see which hooks really stick for you. You can (and should) buy it over at Bandcamp.