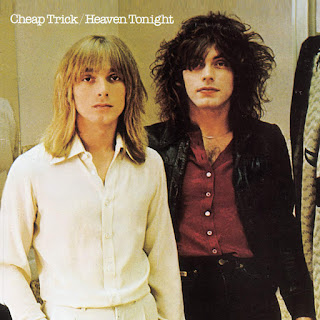 I generally use this space to share the albums I love. But I'm making an exception here, because, as much as I want to like Cheap Trick, I simply don't. I like a few of their songs, maybe a greatest hits collection's worth, but for the most part the band just doesn't do it for me.

I do, however, love power pop. And for some reason, Cheap Trick is one of the go-to names people drop when they're trying to make a comparison to harder-edged power pop. And I just don't see it. When I think harder-edged power pop, I think bands like their fellow Illinoisans Material Issue. To me, with a few exceptions, Cheap Trick sounds more like basic 70s hard rock (and power ballads).

Still, Heaven Tonight, their third album, has some resonance for me. And that's because of "Surrender," one of the greatest songs ever. (I have it at #237 on my 900 Favorite Songs list, in case you were wondering.) Something I always associate with an important part of my childhood musical obsession.

When I first discovered pop music in 1975, at the tender age of 9, I was strictly a Top 40 guy. I had a hand-held AM transistor radio, so I could sit in my room and listen to it constantly, tracking the rise and fall of every song through the charts. (Which I obsessively followed care of the WLS-AM weekly surveys, which I would pick up dutifully from the local record store, about a 20-minute bike ride from my suburban Chicago home.)

But by 1978, as a worldly 12-year-old now in junior high, I had started to tire of the lightweight pop singles on my AM radio. I began listening to classic rock on the FM dial; around this time I discovered The Who, my favorite childhood band, and would spend hours in the school's music library, headphones affixed, listening to Who's Next, the synth loop of "Baba O'Riley" immediately changing my life and heightening my intense connection with music. And Cheap Trick's "Surrender" is one of the songs emotionally interconnected with this period in my life. Yeah, it was a Top 40 hit (there it is on the WLS survey below); but the classic rock stations I was getting into on the FM dial, WLUP and WXRT, also played it constantly. (I didn't own a stereo with an FM band until some time later, so I'd force my mom to play those stations on the car radio.) Cheap Trick were sort of local heroes in Chicago, but I imagine the song would've gotten traction anywhere. It's just ridiculously infectious. Sure, lyrically it's a little unusual, with its thinly-veiled reference to a soldier losing his penis to venereal disease (a decade before the Pixies would reprise this theme, without the veil, on "I've Been Tired"), but its "Mommy's alright, Daddy's alright, they just seem a little weird" chorus was undeniable. 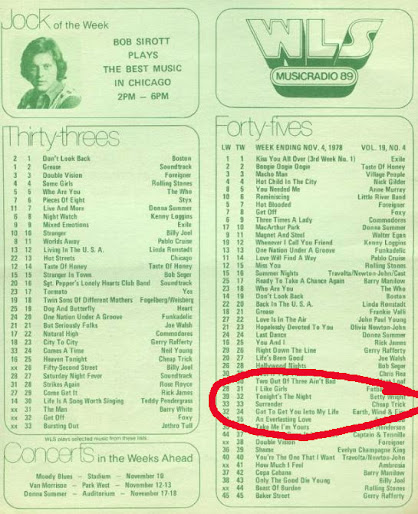 My recollection is a little hazy, all these years removed, but I think the distinctive opening, the quick drumroll into the guitar/synth hook (the insistent synth loop's similarity to "Baba O'Riley" wasn't lost on me), was used as the theme music for WLUP's station promos, so you'd hear it all the time. Or maybe this is my mind playing tricks on me.

The rest of the album doesn't do much for me. "Auf Wiedersehen" and "Stiff Competition" are as close as they got to power pop; and "California Man" is great, but it's a Move cover, kind of a ringer here. But "Surrender," damn, I could just play that non-stop on auto-repeat. Never got tired of the damn thing.