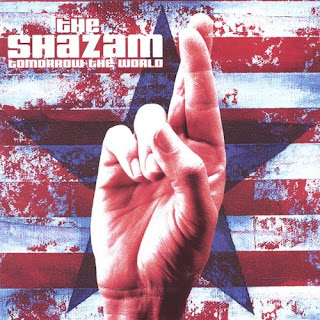 Yes, this is the third Shazam LP I've talked up in this space, but I absolutely adore this band and will not rest until everyone out there has at least given them a shot. As noted earlier, the Nashville-based band blended power pop with 70s-styled hard rock and glam. I talked about Cheap Trick a few days back, and how I've never understood how they're often picked as the go-to name-drop when talking about harder-rocking power pop; it's really The Shazam who should occupy that position.

There's a bit of a drop-off here from their prior album, 1999's Godspeed The Shazam, which was so densely packed with sing-along hooks it was almost overkill; but even with a slightly smaller hit-to-miss ratio, Tomorrow has more than its fair share of winners. "Gettin' Higher" is pure, unadulterated power pop, the sort of surefire hit that would have blasted up the Top 40 charts in a universe where Big Star and the Raspberries were the universal touchstones of commercial success. "Nine Times" is wonderful, silly fun; "We Think Yer Dead" captures the harder rocking yet playful wizardry of the band, a galloping beat and a touch of glammy sleaze and then the mid-song breakdown as the kids' voices take on the chorus; "Goodbye American Man" cleverly repurposes the riff from Big Star's "Don't Lie To Me," the sort of thing that would sound fantastic bouncing off the walls of a large arena as the crowd pumped their fists in the air; and "A New Thing" feels like a long-lost circa-70s FM dial classic rocker.

This band is criminally underappreciated; give 'em another shot.