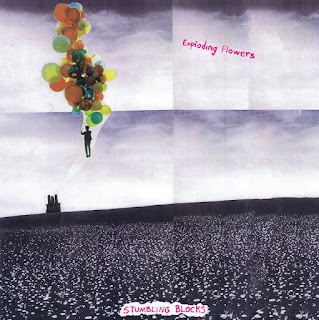 For some reason, a lot of the newer bands I like tend to remind me of New Zealand indie acts like the Clean and the Chills and, in this case, the Bats in particular. L.A.'s Exploding Flowers mingle that NZ garage-pop sound with the jangly retro-60s-psychedelia of 80s Paisley Underground bands like Rain Parade and the Three O'Clock and the wistful folk-tinged indie rock of the Go-Betweens. The songs tend towards gentle, mostly mid-tempo, skewed yet melodic pop, with some lingering organ strains to give them a touch of garage band feel.

Per Bandcamp, the band is comprised of members of various other indie bands with which I'm not familiar, so I guess I've got some homework to do. This is actually their second release; their 2011 debut had a rougher edge and bit more of a post-punk vibe, while this one has a lot more mellow jangle to it.

The album opens with the melodic "A Daunting Thought," the pleasantly chiming guitars and insistent organ coming across like a blend of the Chills and Bats. Other standouts include the more rollicking upbeat "Far, But Never Gone," the Go-Betweens-like "Mirror to Mirror, Face to Face," and the charming pop of "Timing Is Everything." There are a few stylistic variations as well--"Billions Just Like You Here Today" and "My Poor Heart" offer angular new wave flashes, with the Farfisa organ sound of the former in particular mixing things up; "I Need Your Devotion" has more of a droning groove going on--but most sticks to pleasant jangle.