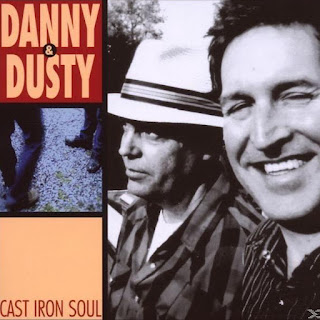 Here's a nice little treat for fans of the 1980s Paisley Underground scene and Americana-tinged indie rock. Danny & Dusty were a side project for Dan Stuart of Green on Red and Steve (Dusty?) Wynn of Dream Syndicate. They first paired up for 1985's The Lost Weekend, which had the joyously tossed-off feel of a couple seasoned rockers setting up in a bar after-hours, knocking back a few brews, and playing a set of rollicking cowpunk. It's a terrific record (among other things adding one of the truly great versions of "Knockin' On Heaven's Door"), at times sounding like a great lost record from fellow Paisley Underground act the Long Ryders--not surprisingly, since that band's Sid Griffin, Steven McCarthy, and the late great Tom Stevens all play on it. Alas, it's out of print, doesn't stream, and is pretty impossible to track down.

Although Lost Weekend seemed like a one-off, Stuart and Winn regrouped 22 years later for a (very) belated follow-up. And while Cast Iron Soul retains some of the casual country rock feel of the predecessor, it's also a more well-rounded album, adding some straightforward indie rock to the Americana blend, as well as sounding more polished and well-rehearsed. The backing cast is also a little different, though the Long Ryders' McCarthy again lends his guitar and vocals to the mix. Plus, this one at least streams, so you can check it out below, even if you can't find the actual record anywhere.

The album opens with a fun bit of honky tonk, the boisterous "Good Old Days," and closes with the bluegrassy "That's What Brought Me Here." But in between it's surprisingly varied. The title track is a Velvet-y rocker; "Raise The Roof" brings the post-punk energy, a classic Dream Syndicate vibe; "Thanksgiving Day" is a winning, Dylanesque mid-tempo pop tune. Frankly, this one's as good as anything Stuart and Wynn have done with their various other bands, and deserves kudos as going well beyond your standard fun-but-inessential super-group effort.