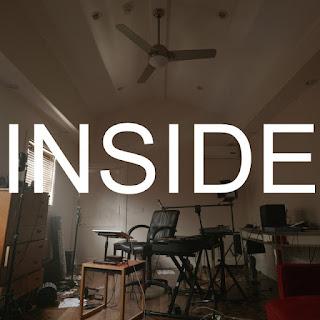 Ok, not an album I can see myself playing very often, but it gives me an excuse to jump on the bandwagon and kvell about what's not just a surprisingly moving Netflix film (which nabbed a bunch of Emmy nominations), but arguably the most perfect encapsulation of the pandemic era that pop culture has offered to date.

Now, I'm the first to admit that I'm about 30 years older than the target audience (I'd never heard of Burnham until my 25-year-old son told me to watch this). I did see the excellent Eighth Grade, but hadn't realized he was the director, and I was unfamiliar with his prior work as a YouTube humorist and stand-up comic. So I came into the Netflix movie with no real sense of what I'd be watching. It's cued up as Burnham alone in his apartment over the past year (he's the writer, director, editor, and sole person to appear), recording funny musical videos (in an observational, not necessarily laugh-out-loud way). But over its 90 minute running time, it becomes something else entirely, an examination of isolation and depression and mental health in Our Covid Year--without ever once mentioning Covid (the closest it comes is a spoken-word interlude where Burnham describes his emotional breakdown while touring as a stand-up comic, after which he took a 5-year sabbatical, fully recovering and ready to re-engage in January 2020 when, as he says, "the funniest thing happened...").

The musical skits focus primarily on internet culture. Indeed, "Welcome to the Internet" sums up the current state of the internet as trenchantly as a Facebook whistleblower appearing before Congress, only much more concisely. But they also address the current state of the world more broadly (short take: it's not good). As such, Inside may have limited appeal to folks in my generation or those who aren't living a very online life. The tropes exploded in the Taylor Swift-ish "White Woman's Instagram" won't mean much to those who haven't spent much time on, er, a white woman's Instagram (fortunately, I have a 23-year-old daughter). And the bit about a YouTube video game walk-through (with the video game being Burnham isolated in his apartment) might similarly not register if you're not a gamer (or, in my case, have a son who was).

Musically, it's mostly Burnham and his electronics, so it sounds like new wave and electropop, maybe bits of the Postal Service or Owl City. Some is pretty jokey, shades of Flight of the Conchords or early They Might Be Giants--see the off-color "Sexting" or "Shit"--but some of the songs are quite striking even divorced from the overarching production. "How The World Works" veers crazily from Sesame Street-like chipper children's song to savage neo-Marxist social commentary (by a sock puppet no less). Burnham breaks out a guitar for "That Funny Feeling," and it's just lovely. Phoebe Bridgers recently covered the track to raise money for reproductive choice in the cesspool of Texas; it's a great song and a great cause, go buy it at Bandcamp.

Sure, there's an air of white privilege to the whole affair, Burnham's emotional upheaval during quarantine clearly that of a well-educated, successful twenty-something white guy; but he's also savvy enough to poke fun at that as well, giving the movie a sort of meta-self-commentary quality.

Anyway, I found the production simply mesmerizing. Of course, spending an hour and a half alone in the guy's apartment is also quite lethargic by design, and I ended up drifting off a few times, so I had to re-watch it to pick up what I'd missed. But that only seemed to enhance the experience. If you've got a Netflix account and at least some sense of internet culture and you're one of the half-dozen people who hasn't yet watched this, make the time to do so. And give yourself some time afterwards to decompress.

Here's "Welcome To The Internet":