Genesis: From Genesis To Revelation (1969) 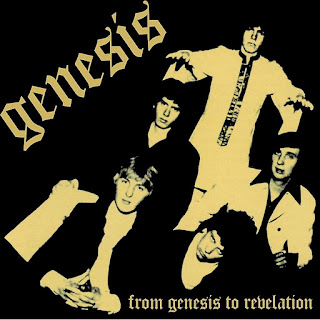 Ah, the perennial question, what to make of "bad" albums we inexplicably love? Are they guilty pleasures? Or is the very concept of a guilty pleasure indicative of rock snobbery, a high-brow insistence that there is some objective truth as to musical quality, because whether an album is truly good or bad simply comes down to whether one particular listener happens to like or dislike the music?

Pitchfork caused a bit of a stir recently when they decided to "re-review" a bunch of records where public assessments had changed since their initial release. They got some flak for seeking a do-over when their initial review got it totally wrong, perhaps not unfairly in the case of some older reviews where the original reviewer seemed more intent on an attention-grabbing snarky slam than a careful assessment. (See their absurd 0-star review of Liz Phair's commercially-slick yet still perfectly entertaining self-titled album.)

Personally, I don't have a problem with reassessing record reviews. One's initial impression of a record frequently changes over time, as you give an album repeated spins in different contexts and reach different conclusions about the music. There are plenty of albums that turned me off on first listen but grew on me over time; I remember how much I hated the first Guided by Voices album I purchased, Bee Thousand, seriously considering returning the disc to the store, yet it's now a personal favorite, and led me to a decades-long engagement with the band's work. More recently, I didn't care for My Morning Jacket's 2020 release Waterfall II, but it turned out listening to it at a gentle volume amidst a global pandemic didn't suit the record well; after hearing the band run through some of the material live a few weeks back, and then coming back home and cranking it up on the stereo, I totally came around. (Conversely, plenty of records I loved on initial spin ended up in the back corners of my collection gathering dust; I remember how much I played Hole's Live Through This back in the 90s, but have probably pulled it out once in the past decade.)

Which leads me to Genesis' 1969 debut. As I wrote about in Jittery White Guy Music, when I was first discovering rock music as a pre-teen, I used the local public library's copy of the Rolling Stone Record Guide as a sort of bible. I'd soak up all the reviews, and use them to guide me through the library's not bad listening library (and, when I had a little cash saved up, trips to the local record store). But I came to realize the Record Guide was not gospel. There were times where I disagreed with its assessments, and realized I shouldn't simply disregard poorly-reviewed albums out-of-hand. The Guide (and particularly Rolling Stone critic Dave Marsh) was surprisingly dismissive of some early Bowie albums I liked, and a lot of Neil Young's work. They really hated a lot of prog, and as I started to get into bands like King Crimson and Peter Gabriel-era Genesis in high school, I got in the habit of ignoring the Guide's ratings, though I still used it for a deeper understanding of historical context. (They also really hated the Grateful Dead; I shared that view at the time, but when I later came to fall in love with the band, their Dead antipathy was one more reason to call foul.

And while the Record Guide was pretty dismissive of a lot of Genesis' albums, they particularly slammed the debut.

Now, let's be honest: Rolling Stone's smackdown of the first Genesis album was not misplaced. It's not a great album. Most (all?) Genesis fans will concede it doesn't compare to anything the Gabriel-led incarnation of the band would later record. It's essentially a collection of demos recorded by some kids still in college, musically rudimentary (an acoustic guitar, a piano, barely discernible percussion) slathered with horrid strings, showing none of the instrumental chops of their later work. The occasional biblical imagery used as a thematic hook can get a little silly (though I don't mind the album lyrically). The arty melodicism suggested early Bee Gees and Moody Blues more than prog. So, yeah, not so great.

BUT... I still love it. Gabriel's voice was alluring from day one, the album's main attraction. But I like a lot of the songs themselves, string section be damned. (Later archive releases of demo recordings without the strings confirmed that, at their core, the songs were surprisingly decent for some kids just starting to feel their way around.) They're wickedly tuneful, with infectious sing-along choruses. "Where The Sour Turns To Sweet," "In The Beginning," "The Serpent," "In The Wilderness," "Silent Sun," and particularly the almost-rocking "The Conqueror" are all little gems, for all their inherent schlockiness.

I've always wished the band had kept a few in their live repertoire -- no live recordings of any of these tunes exist -- just to hear how the "real" Genesis might have played them. There are passages (particularly some of the between-song musical segues) where there are subtle hints of the art rock band that would soon emerge, even though the leap from this to the next year's Trespass may as well be the work of two different bands, Gabriel's voice aside.

Though the original release bombed both critically and commercially, there have been a billion reissues since then to cash in on the band's later success (the first one I owned was a crappy cassette version called In The Beginning); most CDs append a few singles.

So to hell with that old one-star review. I know what I like...

Here's an audio rip of "The Conqueror":