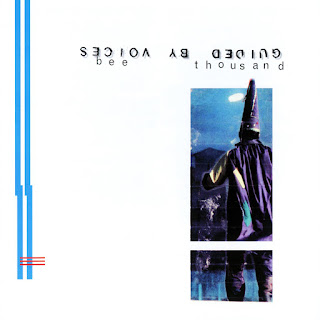 The first time I heard this CD, I almost... almost... turned the car around to drive back to the store and return it.

Back in '94, this thing was getting a ton of hype.  I'd seen the video for "I Am A Scientist" on MTV's 120 Minutes (yeah, I miss 120 Minutes) and thought they seemed pretty cool, so on a semi-regular outing to Berkeley's Amoeba Music, I picked up a copy.

I slipped it into the car stereo on the drive home and... blah.  The music sounded like half-finished demo tapes, unlistenable song fragments, a half-assed, amateurish mess…

But I brought the CD home and left it on the pile of yet-to-be-filed discs stacked up next to the stereo.  For a few weeks, I’d walk by it, maybe give it a quick side-eye when I was inserting something else into the cd player, but shrug it off.  Finally, after a few weeks had passed, I felt inspired to give it one more shot.

And this time it all made sense.  Not that my initial assessment was entirely off the mark – it was a poorly-produced (or, more accurately, un-produced) mess.  The album came across less like a collection of finished songs than scraps of ideas that frontman Robert Pollard came up with in the shower and quickly committed to tape before he’d even bothered to towel off.  Even when GbV sounded like an actual band rather than some dude laying down rough demos, you got the impression they’d just stumbled home drunk and hit “record” without bothering to tune up or check the sound levels or decide when the chorus should kick in.

But it felt like unearthing a great lost Beatles recording session, an updating of Dylan's legendary Basement Tapes, little bits of brilliant songcraft periodically emerging during an informal practice, hints of phenomenal songs-to-be, and all you had to do was close your eyes and imagine how they’d sound if completed and recorded under the watchful eye of George Martin.  The album had hooks galore, if you had the patience to find them; hidden behind often nonsensical in-jokey lyrics and impenetrable titles like “Tractor Rape Chain” and “The Goldheart Mountaintop Queen Directory,” buried beneath a blur of tape hiss and missed cues, instruments that haphazardly darted in and out of the mix, you would find twisted pop songs evincing sheer genius.

Other stand-outs include the almost British Invasion-ish "Echos Myron," as well as the stellar "Mincer Ray," an understated gem from Tobin Sprout, who has occasionally played  guitar in various incarnations of Pollard's ever-changing GvB and supplied some particularly stellar pop hooks to offset Pollard's at times meandering muse.  "Gold Star For Robot Boy" is the demo for the greatest power pop song you've never heard; "Queen Of Cans Of Jar" is a jangly opus that I still can't figure out but fills me with joy.

And right in line with what seemed to be a deliberate effort to sabotage any popular embrace, they went and buried that late-night MTV single, “I Am A Scientist,” perhaps one of a half dozen definitive indie anthems of the decade, at track number 18 on a 20-track album.  “I am a lost soul, I shoot myself with rock & roll.  The hole I dig is bottomless, but nothing else can set me free.”  Damn.  Most bands who wrote a song like that would make it the lead-off track, print the lyrics on their t-shirts, then maybe call it quits and find a desk job, nowhere left to go.

Sure, a few songs remained pretty disposable no matter how many times I tried, but they were also short enough that the album would be onto the next song before I could muster the energy to reach for the “skip” button.

Today, it remains one of my favorite albums, certainly my favorite GbV work (though the follow-up, Alien Lanes, is pretty damn close). It's raw and lo-fi and not for everyone, but if you listen just right you hear the blueprint of a perfect little masterpiece.