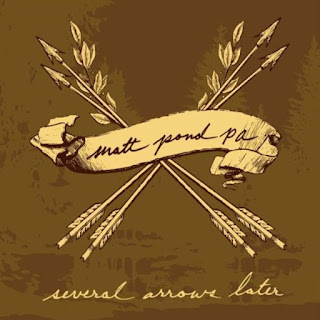 Singer-songwriter Matt Pond has been quietly releasing lovely, mellow jangle pop albums for a couple decades now (recording with various band configurations as Matt Pond PA, though he's also put out some music sans the PA).  I can't say I have a personal favorite; while no one album is what I'd call essential, pretty much every release has a few fantastic tracks (making for one of my favorite single-artist mixes I've compiled).  And even where some of the slower tracks blend together, they invariably make for pleasant listening, the sort of music you throw on the stereo for a quiet morning at home with a cup of coffee and a newspaper.  I file Matt Pond PA alongside the Pernice Brothers as stripped-down, unassuming pop for grown-ups.

The first album I picked up, and probably the one I listen to most frequently, is 2005's Several Arrows Later.  It kicks off with a pair of Pond's finest stand-alone tracks, the gorgeous "Halloween" and the rousing, infectious "So Much Trouble."  Both of these are the sort of things I'll cue up for company, including them on pretty much any playlist, as they're delightful, catchy, and impossible not to love.

Beyond that, the album bounces around between gentle, mid-tempo tunes ("Brooklyn Stars") and more jaunty rockers (like the title track), but as a package it's a terrific little album, sprightly yet melancholy.  As with most of his work, Pond seems to have a knack for consistently tossing off a sweet adult-oriented pop track which sounds like the perfect accompaniment for a walk in the woods on a cool autumn afternoon.

My other fave is probably the harder-rocking follow-up, Last Light, which has a bit more edge; but you can't go wrong with pretty much any release from the hugely prolific outfit.  (Pond also has some great covers out there, offering nice reinterpretations of everyone from Neutral Milk Hotel to INXS to Lindsey Buckingham.)

Here's the video for "So Much Trouble":
And here's a nice live-in-studio version of "Halloween":

And for those new to Matt Pond PA, here's a nifty overview of the band's vast catalog to help get you started: