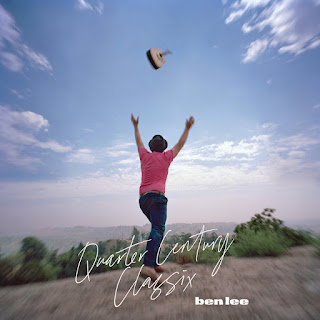 I don't know if this is enough to qualify as a trend, but there have been a number of covers albums from indie artists over the past few years. Singer-songwriter Pete Yorn had one earlier this year, previously noted in this space; noise-pop band Surfer Blood tried their hand at one a couple years back; and, that same year, singer-songwriter Ben Lee gave it a shot as well.

While some artists use these as a platform to show off the breadth of their taste and influences, Lee opts for a laser-like focus on a particular moment in time: the mid-90s indie/alt.rock scene. So right off the bat he's gonna win my heart, as the tracklist looks pretty much like any mix-tape I might have thrown together circa '94 or so--Pavement, Sonic Youth, Guided by Voices, Superchunk, the Breeders, Sebadoh, Built to Spill, etc. He sticks primarily to acoustic guitar and some sparse instrumentation recorded in his home studio, creating the laid-back sound of a campfire singalong, only with friends who were more into Archers of Loaf than James Taylor. But he also largely opts to avoid the easy kitsch of an unplugged solo set, the deployment of reverb, strings, and some backing vocals mostly keeping this out of Starbucks territory and giving the songs some of the sonic edge of the originals, only stripped of all the distortion and feedback.

For the most part, my enjoyment of these turns on how much I liked the originals. So I love the Pavement cover, but can do without the Fugazi. (Fortunately, almost all of the originals were favorites of mine, so the hit ratio is pretty high, at least for me personally.) Some work particularly well--Archers of Loaf's "Web In Front" is kind of fun as a coffee shop ballad; Sonic Youth's "Sugar Kane" manages to recreate the hook-laden dynamics of the original in very different form; his reworking of Superchunk's "My Noise" uncovers the pretty melodies Mac McCaughan often buries beneath a wall of din. Not sure we really needed another run through Daniel Johnston's "Speeding Motorcycle," already masterfully done by Yo La Tengo and Mary Lou Lord, but, hey, great version nonetheless.

Anyway, sure, it's fail-safe fan service for those of us who grew up on these songs a quarter-century ago, but Lee's knack with off-kilter mid-tempo indie pop renders this an enjoyable collection even for those unfamiliar with the originals.

...and an audio rip of his take on Pavement's "In The Mouth A Desert":Here's Lee running through three of the tracks live in the studio: