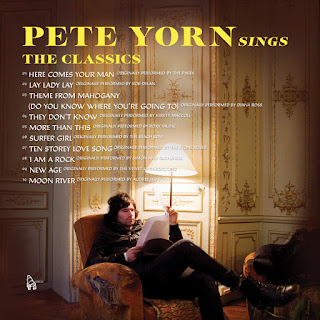 It's another Bandcamp Friday, when you can buy an album (physical copy or download) with all the proceeds going straight to the artist. And my recommendation is a brand new release from indie singer-songwriter Pete Yorn.

Yorn's been releasing reliably great music for the past two decades, combining classic rock traditions with infusions of Americana and power pop; think Freedy Johnston or Ryan Adams or Josh Ritter. His original music is great (I'm partial to 2003's Day I Forgot, but also check out his last one, 2019's Caretakers, or even his surprisingly winning collaborations with actress Scarlett Johansson, but really, you can't go wrong).

And, yeah, a covers album is kind of a cop-out. But if you're new to Yorn, Pete Yorn Sings The Classics is an easy entry point; and if you're already a fan, it's a great complement to his own work. The song selection is unusually creative and inspired, ranging from standards like "Surfer Girl" and "I Am A Rock," to modern-day classics like Roxy's "More Than This" and Kirsty MacColl's timeless "They Don't Know," to surprises like Diana Ross's "Theme From Mahogany" and even "Moon River." Some are done straight, like his suitably fizzy take on the Pixies' "Here Comes Your Man" (with Liz Phair handling the Kim Deal backing vox); elsewhere he shakes things up, like turning the Velvets' "New Age" into lush baroque pop and Dylan's "Lay Lady Lay" into jaunty horn-backed retro-Bacharach-styled pop. And it's great to see some love for the Stone Roses' overlooked "Ten Storey Love Song," revisited here as jangly folk rock.

It's a great listen; check it out on Bandcamp, and then make a run for his back catalog while you're at it.