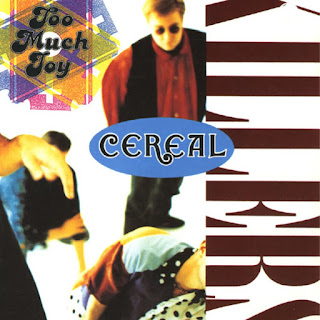 Too Much Joy were an alt.rock band from the late 80s and 90s, blending snarky, humorous, and often surprisingly clever lyrics (shades of Camper Van Beethoven, Young Fresh Fellows, Dead Milkmen, They Might Be Giants) with harder-edged punk-pop-tinged power pop. And while they had some great songs (particular when you took the time to sit down and listen with the lyric sheet), the risk you run with more humor-based songs is that they can quickly grow dated, coming across more like novelty songs than tunes built for lasting enjoyment. So I'll admit that I've rarely revisited them since their late 90s dissolution.

But the band is back, releasing a new album (Mistakes Were Made), which I haven't yet taken the time to listen to but look forward to checking out. It did inspire me to dig back into some of the older stuff, a good reminder that they were a pretty damn fine band, clever and fun and relentlessly energetic.

Cereal Killers, their third album, was probably their most consistent (though I liked the follow-up, Mutiny, quite a bit as well). The album is most noteworthy for "Crush Story," undeniably the catchiest song they ever released. It's a brilliant piece of power pop, the sort of earworm chorus that I can still sing from memory 30 years later. (Hell, my wife, not a music fan, who mostly tolerates my obsession as incessant background noise, can still sing it based on various mixtapes I used to send her before we were married.) And while singer Tim Quirk, for better or worse, has a vocal style that sounds like he's being snarky even when he's not, this one plays it pretty straight.

I also still love "Goodbye Ohio," a wonderfully dense narrative suite with Who-like crunchy riffs and a hook borrowed from New Order; it really wowed me at the time, and sounds pretty impressive even today. Plenty of other gems here as well (like the opening party rave-up "Susquehanna Hat Company" and similarly punchy "William Holden Caufield"), and if you can get past the at times dated sound of 90s alternative guitar rock, there are some killer hooks and lyrical turns that rise far above mere novelty value.

Looking forward to carving out a block of time for the new one (which you can buy on Bandcamp, along with a good number of older releases).

File Under: 1990s Power Pop Too Much Joy