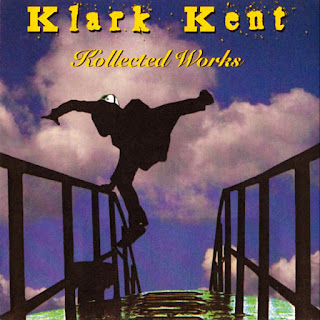 Klark Kent was, of course, the alter ego of Police drummer Stewart Copeland, who released a number of singles, as well as a self-titled album, as Klark Kent in 1980, supplying all the instruments and vocals. Some pressings were also labeled "Klerk Kant," apparently to limit exposure to possible lawsuits from DC Comics. (Though Copeland omitted his name from the records, ostensibly to avoid capitalizing on his Police fame, fans figured it out quickly enough.). The LP and singles were collected in 1995 as Kollected Works; alas, both the originals and the compilation are long out-of-print and all but impossible to track down.

Which is a damn shame, as it was wonderfully fun, quirky music that's highly enjoyable in its own right aside from being a Police-related curiosity. Songs like "Any Other Day" from 1979's Regatta de Blanc, the rare allowance from Sting for Copeland to grab the spotlight, give a pretty good heads-up for what's in store with Klark Kent: Silly, unpretentious, and offbeat, with shades of ska scattered among the New Wave pop beats. It's a little more Devo (or maybe the Waitresses) than the Police, though the music makes a good case that Stewart was far more responsible for the Police's early sound than Sting-centric revisionism may suggest. As a vocalist, Copeland may be no Sting, but that's not a bad thing; his goofy tone (familiar from his few contributions to the other band) works well for the songs, albeit better suited to single-sized bites than a full-length album.

As a lukewarm Police fan myself, I actually enjoy this more than a lot of that band's work. Hell, "Don't Care" is a fantastic single, wickedly fun and energetic; that and the upbeat rocker "Thrills" harken back to the Police's early punk-ish singles. "Away From Home" recalls "Any Other Day" with its lightweight silliness. Other songs highlight Stewart's heavily stylized, syncopated percussion wizardry, like the complex and delirious "Too Kool To Kalypso." And he indulges himself a bit on tunes like "Office Talk," largely a Police-y instrumental with random voices, and the percussive and similarly spoken-word-heavy "Stay Ready." Plus, if you find Copeland's goofy lyrics and vocals a bit much, he throws in a few instrumentals like "Grandelinquent" which show off his mad musical chops.

It's all great fun, wholly of its era but capturing the early 80s vibe better than a lot of records held in higher esteem.

Here's the video for "Away From Home":

Here's "Don't Care" mimed on Top of the Pops (with the rest of the Police in masks):...and an audio rip of "Too Kool to Kalypso":You can stream the whole record on YouTube:
File Under: 1980s Great Lost Albums Klark Kent New Wave Police