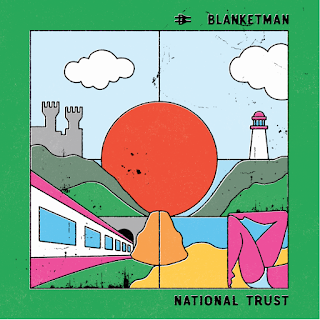 Here's a minty-fresh new release I've stumbled across and felt the need to pass along ASAP. I still remember my excitement a little over a year ago coming across the debut from Kiwi Jr., a Canadian band unafraid to proclaim a love of Pavement and legendary New Zealand garage-rockers the Clean. (And that band's follow-up from earlier this year was similarly enchanting.) But apparently they're not the only ones expertly mining that same intersection: Manchester-based Blanketman's debut EP has a similar vibe. I've just spun through it a couple times and it's terrific.

"Dogs Die In Hot Cars" is a slowly loping number full of jagged riffs that manages to be the perfect great-lost-Pavement-track, a little more Spiral Stairs than Malkmus; ditto the joyous jangle of "Leave The South." The rollicking "Beach Body" is more punk-flavored, the sound of a band with a shit-ton of Fall records scattered around the apartment; but for the most part the songs here offer less bracing, jangly post-punk guitars with oddball lyrical hooks. Its sole frustration is its brevity; I'm definitely jonesing for a full-lengther from the band.

You can buy/download the album through the band's official store. (I don't see it on Bandcamp, though they've got a couple earlier, more punk-sounding singles up there.)

Here's the video for "Leave The South":