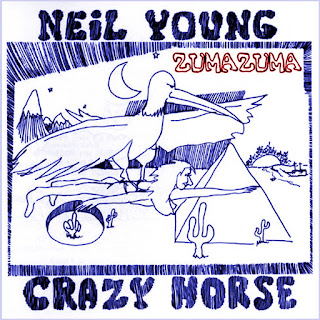 One of the biggest treats on Neil's second Archives box, released last year and covering his work from 1972-1976, was a wealth of previously unreleased material from the 1975 Zuma recordings. And while that album is one of my personal favorites, not exactly in need of reworking, I immediately set about creating an alternative double-album version of the record, adding in the newly unearthed electric recordings with Crazy Horse. (I didn't include the unreleased acoustic stuff, which didn't really fit in, though I retained the like-sounding "Pardon My Heart" from the original as it's hard to imagine Zuma without it.). I left most of the original album intact save for some reordering (the timeless epic "Cortez the Killer" always struck me as a better album closer than tucked into the middle); but I did end up deleting the CSNY song "Through My Sails," which always kinda clashed with the rest of the album (and instead used it for an imaginary CSNY album I created based in part on some other rarities in the box).

The most interesting additions are the electric versions of "Ride My Llama" and "Pocahontas," both of which Neil would also record as solo acoustic numbers, and which ultimately saw official release on 1979's epic Rust Never Sleeps. I'm pretty neutral on which versions are better, but it's interesting to hear the amped-up Crazy Horse versions here. There's also an early electric version of "Powderfinger," and while that happens to be my favorite Neil Young song, this early version is a little slow and plodding, lacking the distinctive guitar riff he'd later flesh out. (That song was also officially released on Rust, though alternative acoustic versions have also surfaced on various bootlegs and more recent official vault releases.)

The unearthed original songs aren't necessarily essential, confirming that Neil made the right choices in the final Zuma edit, but they're boisterous fun and work well in the context of the expanded album. "Born To Run" (not the Bruce song) is kinda drab (reminds me a bit of dumbed-down Crazy Horse tracks like "Welfare Mothers" or some of the stuff on Re-Ac-Tor), but I like both "Kansas" and especially "Hawaii," which are at least as good as the original album's "Stupid Girl."

Is it a better album in its longer form? Hard to say. Any record with both "Barstool Blues" and "Cortez the Killer" is gonna be amazing regardless of what else is included, and the alternative versions of the Rust tunes are pretty cool after hearing them in their later incarnations for so many decades. Check it out.