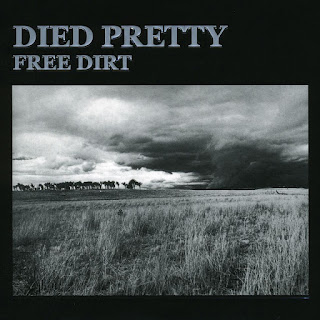 Heading back once again to my college radio jangly guitar days--good lord, will we ever run out of these records? Died Pretty were an Australian band who released a half-dozen or so albums in the 80s and 90s, part of the indie scene alongside bands like the Go-Betweens and the Church, rocking a rustic Americana sound with a harder post-punk edge and some garage band organs, calling to mind everyone from Dumptruck to the Dream Syndicate to Dylan (and those are just the Ds). Their 1986 debut is darker and edgier than many of the bands of the era (with singer Ron Peno's vocals a bit, shall we say, unpolished), but there are some cool tunes to be found here.

"Blue Sky Day" has the melodic jangle we'd expect from the college radio bands of the era, a catchy, cathartic anthem; "Through Another Day" is similarly infectious, kinda indie-rock Dylan; "Laughing Boy" is a rousing rocker; "Next to Nothing" is a sprawling epic that starts off as a country ballad before blasting off into a Velvet Underground freak-out. The CD also tacks on the single "Stoneage Cinderella," a bit more poppy but still with plenty of murk.

I probably have a slight preference for the follow-up, 1988's Lost, which cleaned up some of the edges and added a few more hooks, but that one doesn't stream; still, definitely check it out if you can track it down.

...and an audio rip of "Laughing Boy":Here's a live "Blue Sky Day" from a reunion tour: