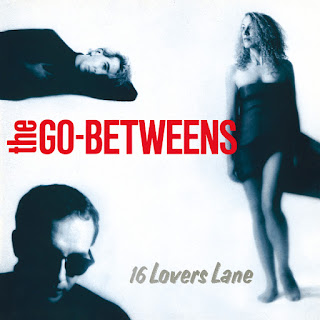 Austalian indie rockers The Go-Betweens check off a lot of the right boxes for me--jangly guitars! folk-rock! sweet melodies!--yet for all the reverence I see for the band from like-minded music fans, I've always found them a little tough to truly get into. I'm not sure if it's the artier, more skewed musical elements (particularly on their earlier records), or something about the sound (the Australian-ness of it?), but I find some of their music a little off-putting--I generally like about half the songs per album. (The band's co-founders and constant presences among revolving supporting musicians, Robert Forster and Grant McLennon, share singing and songwriting duties, and it may be that I prefer one to the other, but I've never quite figured out who's responsible for which tunes.)

Still, their 6th album, 1988's 16 Lovers Lane, finally won me over, and it's an album I still play all the time. I'm particularly drawn to "Streets Of Your Town," a personal favorite, gentle sweetness wrapped in melancholy. Opening track "Love Goes On" is another favorite, bridging the more straightforward folkie-jangle with some of the holdover artiness, a song that conjures a bit of the Smiths if Morrissey weren't so depressed. Meanwhile, "Was There Anything I Could Do?" is a more rousing, upbeat number than their more traditional mid-tempo jangle. The album sounds lovely, abetted at times by Amanda Brown's backing vocals and violin.

Sadly, just as I got into the group, they decided to break up. But after a 12-year break, Forster and McLennon regrouped, and I actually like their 3 post-reunion albums at least as much, maybe more than, the original run. (Alas, McLennon passed away in 2006, though Forster has continued releasing music on his own.)