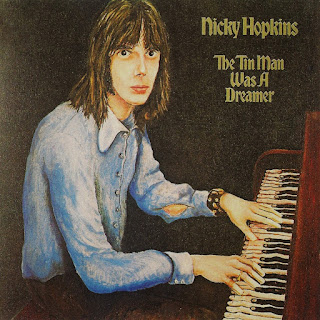 Today's the birthday of the late great Nicky Hopkins, one of the most legendary of all session musicians. (How many people could say they played on records for the Beatles, Stones, Who & Kinks? Not to mention Bowie, Jerry Garcia, Matthew Sweet, the Jayhawks, and on and on.)

I decided to pull up an album I rarely play, yet is such a joy when I do. Hopkins only released a few albums of his own during his sadly brief lifetime (1944-1994), yet 1973's Tin Man is surprisingly solid. His vocals are warm and guileless; his playing is impeccable; and it doesn't hurt to have friends like George Harrison and Mick Taylor to lay down some guitars.

Musically, it's straight 70s classic rock with a nice pop touch; recorded not long after his work on the Stones' Exile on Main Street, you can hear a lot of those traditional rootsy rock vibes throughout, with a healthy dose of Elton John and Harry Nilsson as well. "Waiting For The Band" is terrific, a sweet, lovely little piano-driven pop song; "Lawyer's Lament" has a similarly Beatlesque, baroque pop sound. "Dolly"  and "Dreamer" are more in an Elton-like mode, endearing ballads, the latter sounding like something John Lennon may have recorded; while elsewhere Nicky and the band show their musical chops, like on the jazzy instrumental "Edward."

While largely remembered for his supporting work for bigger stars, Tin Man makes a pretty sound case that Hopkins belongs in the rock & roll canon for his own work as well.

Here's an audio rip of "Waiting For The Band":

Meanwhile, here's a handy mix giving an overview of some of his most noteworthy session work: