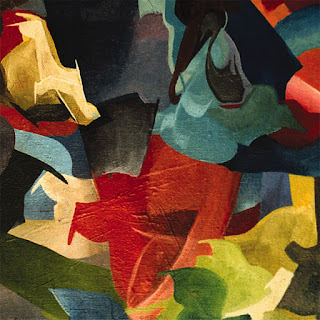 Neo-psychedelic band Olivia Tremor Control's second (and final) full-lengther tends to get overlooked, stuck in the shadows of its breathtaking predecessor. 1996's Dusk at Cubist Castle was a mid-fi studio extravaganza, a reimaging of the universe of Magical Mystery Tour and the Beach Boys' Smile, psychedelic acid trap made real with ridiculously catchy tunes to boot. Black Foliage: Animation Music doesn't depart from that formula, just enriches it, slathering another batch of wonderful psyche-pop in studio wizardry and endless layers.

The problem with the album is that it's just way too dense and busy. The stand-alone pop tunes are buried in small snippets of sound effects and sonic collages; and even isolating the "real" songs finds the hooks (and damn, there are hooks) at times obscured by the barrage of sounds and voices. Still, there is a great album to be found here, one every bit as memorable as Dusk (arguably more so, the extra studio polish giving the songs some heft at times lacking in Dusk's lower-fi thinness).

I made myself a more concise version of the CD (recreated on the Spotify playlist below, though without the ability to pare the longer pieces down to a more appropriate length), and it's pretty great. A few of the songs are OTC at their best, tunes like "Hideaway," "A New Day," and "California Demise 3" picture-perfect psychedelic pop masterpieces, equal parts 60s Nuggets and baroque power pop. Others lean more heavily on psychedelic explorations, tunes like "A Peculiar Noise Called 'Train Director'" and "A Sleepy Company" working similarly infectious hooks but interspersed with more sonic weirdness.

Sadly, OTC dissolved shortly thereafter, its two leaders breaking off into separate bands (Circulatory System and Sunshine Fix), both continuing certain elements of OTC's sound but less successfully. They later regrouped for some live performances, but their reunion was cut short by the sad passing of co-founder Bill Doss. As a swan song, Black Foliage is more than respectable, and if you have the patience to parse through the self-indulgence it's full of terrific music.