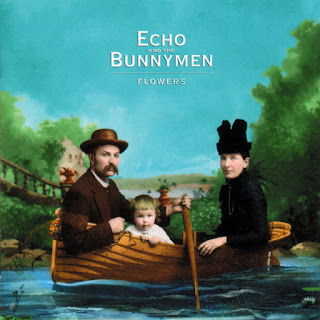 Contemporaries of mine who grew up on the early 80s incarnation of Echo & The Bunnymen can be excused for missing out on their latter-day revival; the music's been pretty much ignored (at least here in the US)--hell, I didn't even realize they'd reunited (or at least singer Ian McCulloch and guitarist Will Sergeant) until well into their second run. Indeed, their initial tenure (particularly the singles captured on the definitive '84 compilation Songs to Learn and Sing) was perfectly self-contained, not really calling for any follow-up.

But the post-reunion work is surprisingly great. Ok, fine, I can't say they have any stand-alone singles as memorable as, say, "The Killing Moon" or "The Cutter." But as an album band, they're arguably as good as, if not better than, they ever were.

2001's Flowers is particularly strong. It sounds great, McCulloch's distinctive new wave croon and Sergeant's alternately jangly and boomy atmospherics meshing perfectly. And, yeah, there are some pretty terrific songs. "Make Me Shine" has a lovely, Byrdsy jangle; "It's Alright" is a massive Britpop anthem; "Everybody Knows" is thoroughly rousing, one of their best post-80s tracks. But the quieter pieces make an impact as well, like the languid, psychedelic groove of "Buried Alive," with its Frippy guitar line revisiting Bowie's "Heroes."

Personally, I think one can enjoy their second run even without a reverence for the first; sonically and musically, a newbie could easily mistake them for a new band that grew up on the Stone Roses and Oasis and the Charlatans, rather than some new wave-era leftovers trying to relive past glories. (The band's most recent proper album came out in 2014; 2018's release was an odd and inessential (albeit perfectly pleasant) set of reworked, heavily orchestrated versions of older material.)

...and "Everybody Knows":Here's a live version of the title track: