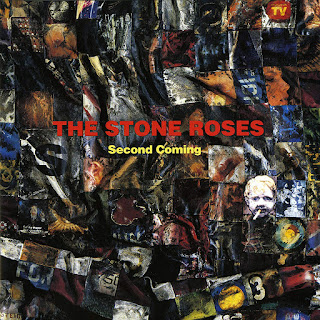 The trajectory of the legendary Stone Roses is one of the saddest in rock music. And no, I don't mean former lead singer Ian Brown's recent emergence as Twitter's leading anti-mask Covid-denying wackjob, though, yeah, that's pretty freakin' sad.

Following a few brilliant singles, the Roses' self-titled 1989 debut is one of the all-time greats (great debuts, great albums period), a perfect blend of melodic, jangly, retro-psychedelia akin to the American Paisley Underground scene and the emerging post-New Order dance-pop of the band's Manchester home. Alas, crippled by myriad legal troubles and the crushing pressure to recreate the massive critical success of the debut, the band all but disappeared for five years, a lifetime in rock & roll. By the time they reappeared in late 1994, Britpop bands like Oasis and Blur had adapted the Roses' sound and made the band seem almost superfluous.

Naming the album Second Coming certainly didn't help matters, setting the band up for failure, and the album wasn't terribly well-received. Still, for all its baggage, I find it a lot better than its reputation, and while not recreating the glory of the debut I'd say half of it is pretty damn-near great.

Opening the record with an 11-minute jam that sounds more like the run-out from one of their earlier singles wasn't exactly an enticing way to herald a comeback. But it's followed by the hard-charging "Driving South," a much more aggressive tune than their earlier stuff, with a snaky-guitar groove that owes much to Peter Green's bluesy Fleetwood Mac era. A few other songs inhabit the same harder-rocking space, more ecstasy-laden dance-floor vibe than easy listening, and they're, alas, on the forgettable side.

But there are a few more melodic tunes that highlight the band's strengths. "Ten Storey Love Song" is beautiful Byrdsy jangle, as solid as their earlier work; "How Do You Sleep" is similarly melodic, the sort of song one would anticipate on the band's sophomore album. Album closer (setting aside the throwaway hidden track) "Love Spreads" is another bluesy rocker, yet, like "Driving South," weaves a dark and captivating groove, strongly suggesting the band could have stuck around for another album that would have been a worthy contender in the Britpop scene. Alas, the album proved to be their last hurrah.