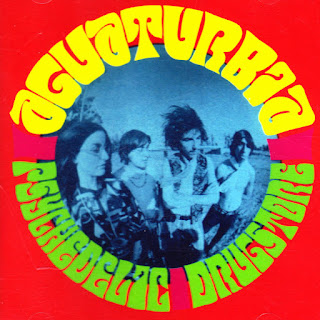 Taking another trip back into the psychedelic backwaters of my collection, here's a little obscurity from an unlikely Chilean band. They were a little on the harder-rocking blues end of the garage band milieu, but with plenty of trippy psychedelic explorations as well. From what I've read, the band was fronted by guitarist Carlos Corales and his wife Denise Corales, who rocked a definite Grace Slick (albeit heavily accented) wail.

The album (a compilation of a couple Chile releases) is highlighted by a few covers. Their take on the Airplane's "Somebody To Love" is pretty faithful to the original; the blues standard "Rolling & Tumbling" out-Creams Cream with its bluesy muck. But the centerpiece is an extended romp through Tommy James's "Crimson & Clover," with a reliably excessive reliance on the wah-wah pedal delivering the headphone-friendly vamp you know you want. Elsewhere there's a fuzzy garage-band romp called "I Wonder Who" to get your toes tapping; while "E.V.O.L" is just a crazed monster jam, Janis Joplin and Santana and a whole lot of mescaline.

As with most of these little numbers in my collection, it's hardly essential listening, more a novelty given its Latin-tinged spin on garage rock, but worth a quick visit when you're up for a ride in the wayback machine.

Apparently the band is still kicking around, all these years later; here's a live take on "E.V.O.L." from 2009: