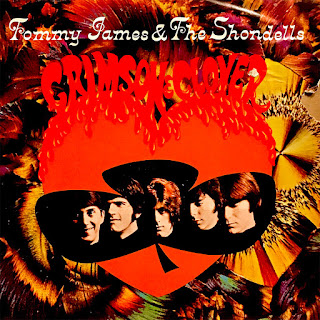 By the time the Beatles released Sgt. Pepper in '67, it became obligatory for every early/mid-60s pop band to try their hand at a psychedelic album. Some made the adjustment with surprising adeptness (i.e. the Pretty Things, the Small Faces, the Byrds), some awkwardly (i.e. the Stones' Satanic Majesty, which I personally think is worth a reappraisal). Others seemed a bit begrudging.

Tommy James & The Shondells, who always sounded more comfortable with AM radio pop singles, were a little late to the party; 1968's Mony Mony LP was still pretty straight pop, a bit anachronistic. But they jumped in with 2 psyche-infused LPs in 1969. The second, Cellophane Symphony, went all in, particularly on the 10-minute headphone-friendly freak-out title track; but Crimson & Clover is more of a toe-in-the-water affair, still pretty poppy. For the most part, they simply slow down some of the songs and run a lot of the guitars and vocals through a flanger, giving it all a trippy underwater warble, but the songs themselves aren't terribly adventurous. They end up sounding like the Bee Gees after splitting a single joint.

But while they remained essentially a singles band, it's a pretty entertaining album. This, of course, is largely due to the title track, which in its longer album version, throws in a much longer guitar jam than the single before heading into the tremolo vocal outro. It's one of the ultimate late 60s songs, perfectly bridging AM-friendly pop with more experimental-sounding psychedelia.

The jazzy "Crystal Blue Persuasion" (put to excellent use in Breaking Bad) is sappy and dated yet still a wonderful little ditty.

"Sugar on Sunday" is the other big single, a throwback to their early bubblegum pop songs but with all sorts of psychedelic studio tricks thrown in; again, it's definitely on the Bee Gees side of the scale, but still a great song. The non-single tracks are all fine, maybe not classics but enjoyable enough relics of the era. "Kathleen McArthur" is the most Bee Gees-esque of the bunch; "I'm Alive," with its fuzzbox guitars, is more of a garage band-styled rocker.

All in all, maybe not a hallmark of late 60s psychedelia, but makes a good case for Tommy James as more than an underappreciated singles hitmaker.

Here's the video for the shorter, single version of "Crimson":