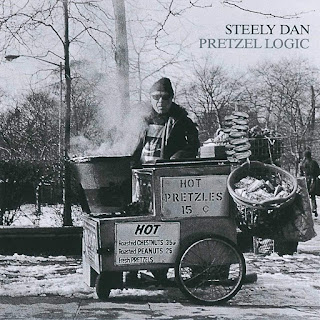 There may be no more surefire way to start a social media flame war than to express a strong opinion of Steely Dan. Hell, 40+ years after their glory days, the band seems to draw more serious admirers (and detractors) than ever.

And while my focus on this blog is to highlight the bands/albums I like in the hopes of winning a few converts, let me just say that, when it comes to Steely Dan, I'm pretty much on the fence.

Which is actually a marked improvement over my initial assessment of the band.

Back in the 70s, as I was just starting to dig into classic rock, spending my days glued to the FM dial (Chicago classic rock stations like WXRT, WLUP, and WMET), I hated Steely Dan with a hot, fiery passion. Their slick, jazzy, hyper-literate, virtuoso rock just seemed so dull and unemotional and utterly unengaging. Oddly enough, some of the same things could be said about other bands I loved, like Pink Floyd and some of the prog I was getting into; but something about SD just set me off. Some of this I could attribute to Donald Fagen's lead vocals, which I've always found grating. But some is beyond explanation; I just did NOT like this band, and would rush to the radio to change the station any time they came on.

(There were exceptions. I always enjoyed "Rikki, Don't Lose That Number," with its killer bassline and that catchy "you could have a change of heart" leading into the chorus; and I liked some early non-Fagen-sung tunes like "Dirty Work.")

By the late 70s and early 80s, as I turned my attention increasingly towards punk and new wave, and later college radio/indie rock, my antipathy only grew. Ok, that's not entirely true; I stopped listening to classic rock radio, so Steely Dan just pretty much disappeared entirely from my radar screen. My short-lived college band did play a cover of "Do It Again," which was a concession I made to our lead guitarist in exchange for his agreement to play some Clash and Undertones covers; but beyond that, I was living Dan-free.

But by the time I hit my forties, my stance had softened a bit. In the era of CD remasters, I was able to enjoy a lot of classic rock artists I'd disdained in my youth largely because they sounded so great; certainly Steely Dan is a band perfect for capitalizing on higher-end stereo equipment and digital clarity. (Ditto bands like Supertramp, Fleetwood Mac, and Yes.) Likewise, decades since falling for the Ramones and the Clash and R.E.M., I can appreciate the cold precision of the band's musicality. Also, as I grew older, I was much more open to bands which I found dull and uninspiring yet perfectly functional as background music on Sunday mornings or when friends dropped by (which is not at all a negative).

I still find Fagen grating in larger doses. And I just don't get the adulation of their lyrics; sure, they're sophisticated and clever and rife with obscure literate references, but their supposed humor and caustic wit still escapes me.

I can't say there's any one album I find particularly appealing; I made myself a CD mix with about 80 minutes of songs I sort of like, and that's more than enough Steely Dan for me. But Pretzel Logic is more given to pithy, hooky tunes rather than meandering pieces, and has a few personal faves (the afore-referenced "Rikki," as well as "Any Major Dude Will Tell You" (though I prefer the Wilco cover) and "Barrytown" (though I prefer the Ben Folds Five cover).