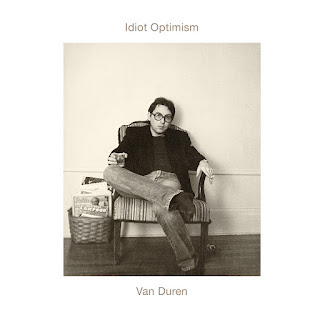 While a lot of power pop bands (fairly or otherwise) are quickly tagged with a "kinda sounds like Big Star" label, Van Duren is probably more deserving of it than most. He was a denizen of the same 70s Memphis rock scene that birthed Big Star; and after the dissolution of the band, he did some playing with both Chris Bell and drummer Jody Stephens.

He recorded and released one proper LP, 1978's superb Are You Serious? His second album, Idiot Optimism, was recorded the following year, but despite being at least as great as the debut, it was shelved and didn't see the light of day until 2000. There have been a few reissues of his work since then; Omnivore has now released a new master of the album (as well as the debut) -- you can find them here. There was also a documentary about the little-known singer called Waiting: The Van Duren Story (still haven't seen it myself), and its soundtrack serves as a nice little primer.

He gets the usual comparisons to not just Big Star, but McCartney and Emitt Rhodes. On Idiot, he ratchets up the volume a bit from the more ballad-heavy debut, but retains the catchy melodies. There's a ringer in his cover of Chris Bell's "Make A Scene" (still unreleased at the time this was recorded, but eventually showed up on Bell's posthumous I Am The Cosmos), as well as some terrific originals. Opener "Bear With Me" gets things started in fine fashion, a piano/guitar-driven stomper straight out of Badfinger territory. The more mid-tempo "Tennessee, I'm Trying" filters in some Americana, recalling Marshall Crenshaw. Later on, you've got "Mabel (I'm Amazed)," which, besides a brilliant title, highlights his more McCartneyesque inclinations.

A must-own for Big Star acolytes and power pop fans of all stripes.

Here's an audio rip of "Make A Scene":