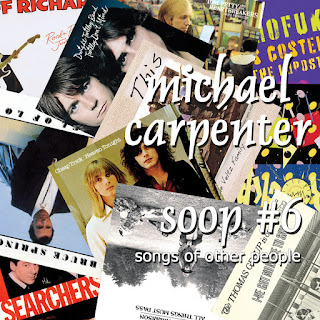 Australian musician Michael Carpenter is one of those perennial power pop artists who's been plugging away for years but not getting much attention outside of the diehard power pop community. Which is a shame, as he's a fine craftsman of catchy tunes, easily enjoyed by anyone with a ken for Matthew Sweet or Jason Falkner or the Fountains of Wayne. But besides a litany of great originals, he's a prolific purveyor of cover songs, both on myriad tribute albums and on his home-brewed series of albums under the SOOP (Songs of Other People) moniker.

The latest SOOP, like its predecessors, cherry picks a mix of songs both obvious and relatively unknown; on each edition, there are a handful of old favorites and a few tracks that have me scurrying to figure out who recorded the original. (This time around, he tries his hand at Cheap Trick, Springsteen, Tom Petty, George Harrison, Rockpile, and Elvis Costello, among others.) And while cover songs are, with few exceptions, the very epitome of inessential listening, Carpenter at least keeps things interesting by selecting not just like-minded pop artists, but various oldies and classic rock songs that rest a little beyond his own stylistic comfort zone. Anyway, if you'd like a slightly tweaked new angle on some familiar faves, or just want to let someone curate a fantastic playlist while adding his own spin to the tunes, definitely check out some SOOP (and from there, be sure to investigate his originals -- 2016's The Big Radio is terrific).

Pick it up at Bandcamp.