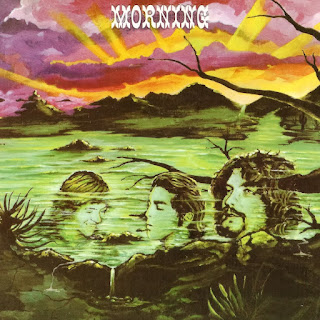 As noted in prior posts, I'm a sucker for obscure 70s Americana-tinged rock; I'm always astounded by how many good (and occasionally great) albums were released by bands who plainly drank from the same well as American Beauty-era Grateful Dead, CSN, Poco, and Gram Parsons, as well as early UK pub rockers like Brinsley Schwarz, only to promptly disappear until being rediscovered decades later by some reissue label or an intrepid blogger.

Morning were an L.A. band that stuck around for a couple albums, and their 1970 debut is one of my favorites of this whole genre of great lost country-rock acts. You've got the usual touchstones -- hooky, upbeat pop-rockers ("Tell Me A Story"), gorgeous harmonies (opener "Angelena," the gorgeous ballad "Easy Keeper"), straightforward Dead (or Eagles)-friendly country rock ("It'll Take Time"), snatches of lingering 60s psychedelia (the CSN-esque "Sleepy Eyes"), and just a bit of stretched-out jamming (the wonderful "And I'm Gone," which after a brief, folky prelude cuts loose into a rollicking guitar & piano workout).

While clearly of its age, this one is far less deserving of its historical oversight than blander affairs; the production is better than average for an off-label release, and the songs are less derivative than the more slavish American Beauty/Crosby, Stills & Nash imitators out there). That it's not a classic rock mainstay seems like a serious miscalculation. Check it out.

Here's an audio rip of "Tell Me A Story":