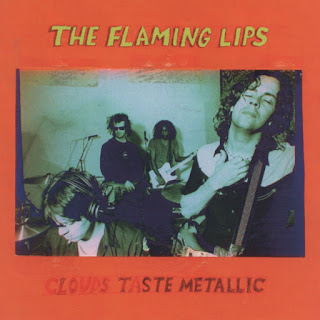 Yeah, I've already talked up my two favorite Lips albums, 1997's Zaireeka and 1999's The Soft Bulletin. But I'm dipping back into the well for another favorite, having just spent some time delving deep into their back-catalog for an upcoming piece in Toppermost.

After signing with Warner Brothers earlier in the decade, the band largely eased off their early post-punk psychedelic garage rock into a more studio-enhanced, musically complex, pop-tinged alt.rock. 1992's Hit to Death in the Future Head and 1993's Transmissions from the Satellite Heart represented a sort of middle-ground between the band's more eccentric, boisterous tendencies and their growing pop sophistication. With Clouds, they finished sanding off a lot of the rough edges, ending up with their most baroque, musically rich album to date, while still retaining the early guitar-driven energy.

After the slow-churn opener, the album kicks off in earnest with "Psychiatric Explorations of the Fetus with Needles," the sort of fizzy, turbo-charged skewed pop song that had become second-nature for the band by this point. There are a number of like-minded, upbeat rockers just offbeat enough to skirt radio-friendliness, like the whimsical "This Here Giraffe," the laid-back acoustic shamble of "Brainville," noisy garage rocker "Kim's Watermelon Gun," and the chipper, melodic pop of "Christmas at the Zoo." The high point is closing track "Bad Days," a sort of post-punk "Take This Job and Shove It" with a restrained opening segment launching into a delirious marching band stomp.

The album is a little slower and quieter in spots, and can drag a bit, but overall gives a good preview of the more orchestrated, noise-free studio sheen that would come with Bulletin and later albums.

Here's the video for "Bad Days":