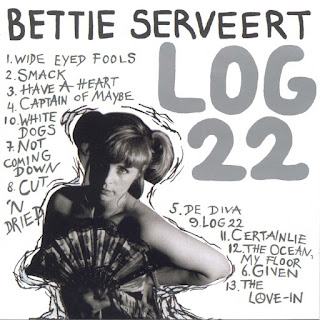 For my next artist Top 10 and discography overview on Toppermost (hopefully you're checked out my recent piece on the Flaming Lips by now?), I'm digging into the archives of Dutch indie rock band Bettie Serveert. And while their 1992 debut Palomine (previously covered here) remains far and away my favorite, I've particularly enjoyed revisiting Log 22.

After three albums that stuck largely with noisy, guitar-oriented alt.rock that blended classic rock from the Neil Young/Crazy Horse playbook with more innovative indie rockers like Pavement and Yo La Tengo, the band's 2000 album Private Suit changed things up a bit, with a slicker, cleaner, at times almost jazzy groove.

For the 2003 follow-up, the band regressed a bit, merging the early, grungy sound with the more stylized Private Suit. As such, it's pleasantly comfortable for early fans while avoiding standing still. The opener, "Wide Eyed Fools," perfectly captures the band's divergent inclinations, with quiet, jazzy verses and a rollicking, infectious chorus that capitalizes on Carol Van Dyk's broad and entrancing vocal range. Even better is the next one, "Smack," one of the band's finest singles, a hopelessly catchy upbeat rocker that sees the band far more willing to employ some dense studio flourishes than on their lower-fi early work.

The balance of the hour finds the band bouncing between similarly poppy alt.rock radio-friendly tunes (like the frenetic title track and the pithy "Not Coming Down," which recalls earlier works), more sprawling, jammed out balladry, and occasional bursts of brass and even (on the odd yet entertaining closing track) faux-disco.

To be sure, the band rarely stretches very far from their comfort zone, and a certain sameness (which would haunt later albums) is present, particularly in some of the longer, less punchy tunes. That said, the hits outweigh the misses -- I was shocked to pull up a Pitchfork review which simply savaged the poor album, unfairly so in my opinion -- and as an overall package, while arguably overlong, it's got a lot to recommend it.

Here's the video for "Smack":

...and for "Wide Eyed Fools":Here's a blistering live performance of the title track:
File Under: 2000s Bettie Serveert Indie Rock Women Who Rock