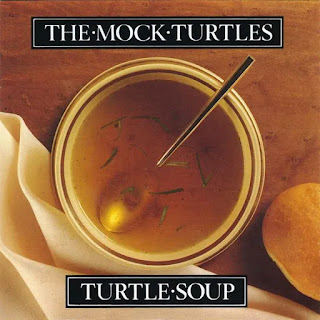 Can't say I know a whole lot about this briefly-lived UK band. I just remember in the late 80s, when tribute albums started to emerge as a thing, they were one of those bands you'd see contributing covers all over the place (Syd Barrett, the Kinks, the Byrds), but didn't seem to have much of an existence otherwise. But apparently they did release an album of originals some time later, which I belatedly snagged not long ago as part of a deluxe 2-CD set that paired it with a ton of other music (including those cover songs I'd heard on those tribute albums).

And their original music actually turns out to be pretty good. They blend Paisley Underground retro-psychedelic pop a la the Rain Parade with some of the like-minded, slightly more dance-oriented music emerging out of the UK's Manchester scene like the Stone Roses (and similar UK acts like House of Love and the Charlatans). The Turtle Soup album itself is perfectly nice, the band capable of crafting pleasant and jangly originals with just a touch of psychedelia. Maybe they didn't distinguish themselves as much as the Stone Roses, but there are plenty of winning, hook-laden tunes, like the upbeat "Head Run Wild," the hypnotic "Lay Me Down," and the effervescent pop of "Oh Helen How?"

"Can You Dig It?" (not a Monkees cover) and "And Then She Smiles," the singles, are infectious, quality tunes that certainly raise the question of why they didn't make a bigger splash at the time.

Some of the bonus tracks on the extended edition are fairly expendable, but there are some decent originals, like the dense rockers "Golden Children" and "Up Here In Heaven," more boisterous than the relatively restrained debut album, and of course all those well-executed cover tunes (their cover of Barrett's "No Use Trying" is particularly effective). Definitely worth a listen.

Here's the video for "Can You Dig It":

...and "And Then She Smiles":Here's an audio rip of their cover of the Velvet Underground's "Pale Blue Eyes":