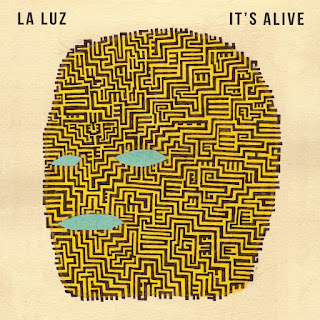 La Luz, an all-woman band from L.A., concoct haunting surf music with a  retro-garage band style that sounds like it was designed specially for a film noir soundtrack. Their full-length debut is a hypnotic array of twangy guitars with wah-wah pedals, gentle washes of organ, and over it all (a couple instrumentals aside) Shana Cleveland's smoky, languid 2:00 a.m. vocals with reverb-drenched backing vox.

Seriously, if you get more than 30 seconds into the enchanting "Call Me In The Day" and don't feel like you're taking a deep drag off an unfiltered cigarette in a shadowy scene from a Quentin Tarantino or David Lynch flick, you're doing something wrong. It's one of those songs that's going to show up in your dreams later that night, I promise you. Elsewhere, opening track "Sure As Spring" is a propulsive surf tune, authentic psychedelic 60s vibes informed by a post-Go-Go's pop sensibility; "All The Time" provides lilting vocals with an air of mystery over a jaunty rhythm; and closer "You Can Never Know" is a sleepy pre-dawn psychedelic dirge, creepy and dark.

Their two subsequent albums are also pretty damn great, introducing a little more brightness and electric kick to the mix, but the debut is my personal favorite. Give it a spin and pick yourself up a copy over at Bandcamp.

Here's the video for "Call Me":