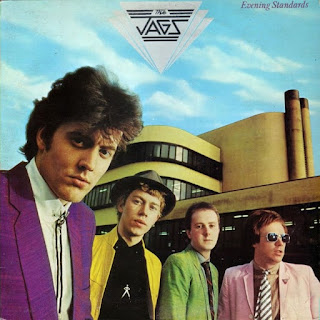 In case the cover isn't enough of a giveaway, yes, The Jags were another one of those skinny-tied new wave power pop bands that seemed to sprout up all over the place in the late 70s and early 80s. If they're remembered at all these days, it's probably for their single "Back Of My Hand," which isn't entirely unfair, as it's just about one of the catchiest songs to emerge from that era, pretty much leaving everything else they did in its dust. It's spunky, it's perky, it's got a chorus most bands would kill to have written.

So, sure, that's the main reason to check out the album. (Though the album version of that tune isn't quite as great as the single, which showed up on a number of compilations.)

Which isn't easy, as Evening Standards is long out of print and never saw a CD release. The bulk of the record (as well as most of the band's second and final LP, No Tie Like A Present) was later included on The Best of the Jags, which did come out on CD -- but, alas, that collection is also out of print, and doesn't stream.

So with the band's music all but disappeared from the face of the planet, you might assume there was little there beyond the one single. But truth be told, the album (as well as it's largely similar sequel) was actually pretty good. Stylistically they sound like the first Joe Jackson album crossed with the Knack, with traces of early Elvis Costello and Squeeze as well -- energetic pop hooks with playful lyrics (when you can make them out through the heavy British accent). Maybe not a lot of songs with real staying power (though a few, like "Tune Into Heaven" and "Woman's World," demonstrate some clever pop-craft), but also no bum notes. Just a solid 40 minutes of jangly, infectious power pop.

Hunt it down, you'll be glad you did.