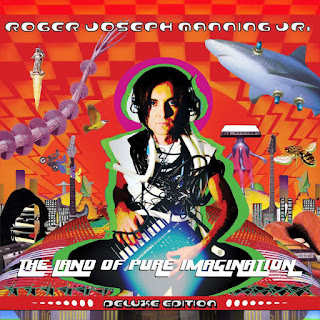 I was browsing through Spotify the other day, and was cheered to find they recently added a few albums from Roger Joseph Manning, Jr., whose work had long been missing from streaming services. Manning, originally a member of alt.pop band Jellyfish and other indie groups, has released a few albums of complex, baroque power pop, sounding like yet another twisted musical genius set loose in the studio to try to recreate the late-era Beatles (or at least XTC) with a boost from modern technology, yet with enough power pop smarts to keep the music relatively grounded. (See also, e.g., the Pillbugs, Future Clouds & Radar, Beagle Hat, etc.)

Pure Imagination was Manning's solo debut (for some reason also issued with the alternate title Solid State Warrior). And it's great, a nifty headphone-friendly work-out. The opening title track starts off as a quiet, stripped-down ballad before leaping into an all-hands-on-deck sonic barrage. There is some (relatively) straightforward power pop here, like the perky "Too Late For Us Now," a cross between Julian Lennon and maybe Freedy Johnston; and some more Brian Wilson-esque lush, orchestral summer sunshine (like "Wish It Would Rain," a song Manning had actually co-written with Wilson himself, though he apparently cut Wilson's contributions for the album version). Much of the album has a bit of a 70s soft pop vibe, suggesting the guy is as into the Carpenters and Todd Rundgren as he is, say, the Dukes of Stratosphear; a few of these slower tracks can plod a bit (I would have preferred a few more busy bits like "Creeple People"). But it's a delightful, engaging listen throughout.

Here's the video for "Too Late For Us Now":

...and a lyric video for the title track:Here's an audio rip of "Wish It Would Rain":
File Under: 2000s Baroque Pop Indie Rock Jellyfish Power Pop Roger Joseph Manning Jr.