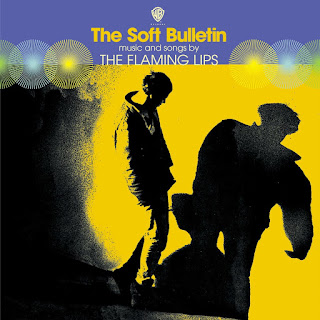 One of my favorite albums of the 90s, and one I almost passed over due to giving too much weight to first impressions.

I was a college DJ when the Flaming Lips' first album came out back in 1986, and its rough, lo-fi amped-up garage rock didn't do much for me.  Unfortunately, that first impression of what turned out to be a very different band than they'd evolve into over the years led me to pretty much ignore them for a decade, even when they became an unlikely alt.rock breakout on the heels of 1993's "She Don't Use Jelly."

But the hype around 1999's The Soft Bulletin was inescapable, so I decided to give them another shot -- and once again, a negative first impression almost blew the whole deal.  I expected some more of that noisy-but-poppy guitar rock a la "Jelly," and was pretty shocked by what sounded like the second coming of Yes.  This thing was dense and complex and orchestrated and, yeah, really kinda proggy, with nary a distorted guitar to be found.  Unexpected and odd, I set it aside.

But a few weeks later I decided to give it a listen with fresh ears, and this time it stuck.  More than that, I became enthralled by its surprisingly earnest optimism and lyrical directness, its bold forays into keyboard-based bombast still grounded by joyous melodicism.  "Race for the Prize" leaps out of the gate with Wayne Coyne's helium-tinged vox and unearthly synth sounds signaling the Yes affinity, with a literal tale of two scientists racing for a cure establishing the album's lyrical themes.  Elsewhere you've got the rollicking "The Gash," speaker-shredding bombast with a galvanizing march; "Buggin'" perhaps best captures the indie pop-rock sound of prior work, pure pop hooks with pianos instead of raging guitars; and "The Spiderbite Song" earnestly relates recent tragedies with poignant lyrics and dramatic percussion.

The highlight for me is the knock-out gorgeous "Waitin' For A Superman," certainly one of the most devastatingly beautiful tracks the band has composed, just oozing with gospel-worthy inspiration but completely transcending any risk of sappiness that such a venture presents:

"Tell everybody waitin' for Superman,
That they should try to hold on the best they can,

He hasn't dropped them, forgot them or anything,
It's just too heavy for Superman to lift."

Great stuff.  And remember, if this one doesn't dazzle you on first listen, give it a second chance.

(Afterwards I ended up going back and acquiring the entire Lips back catalog that I had foolishly passed over the first time around, and was impressed by how much great music they had over the years, though most of what came before was quite different from the epic scope of The Soft Bulletin.  And Zaireeka... damn, we'll have to get to that one as well.)