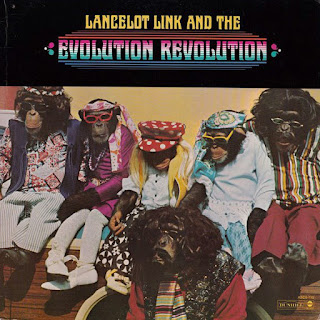 Yes, it's a real album and yes, I'm totally serious. A make-believe band from a children's tv show that's nearly as good as the Archies or the Monkees, only it's... actual monkeys.

I have vague memories of watching tv on Saturday mornings as a small child, the one time each week when my parents would let me sit in front of the tv (aside from Sesame Street and the Electric Company), and seeing the odd and actually rather disturbing Lancelot Link, Secret Chimp, featuring live action chimpanzees with dubbed voices who were comical spies in the Get Smart mode (per Wikipedia, the show was created by former Get Smart writers), but also a band that played music at the end of each episode. Damn, the 70s were fucked up. I still have nightmares about this show (as well as Lidsville and H.R. Pufnstuf and Land of the Lost).

But the funny thing is that the songs were really great. Silly, forgettable bubblegum to be sure, but surprisingly well-written forgettable bubblegum. If you're a fan of the genre, whether in the form of the fore-referenced Monkees and Archies or one-hit wonders like the Music Explosion and Ohio Express and 1910 Fruitgum Company and the Lemon Pipers, then this is right up your alley. It's unfortunate this hasn't stayed in print, because, setting aside the novelty of it being sung by chimpanzees, it's as good as any of those other artists, if not better. (Ok, fine, the Monkees are in a wholly different category, a legitimately great band I'll turn to in this space soon enough, but kind of hard to leave them out of any discussion about Lancelot Link -- 'cuz, again, monkeys.)

Watch the videos and be happy! (But sorry about any nightmares they may trigger.)


Here's "Magic Feeling":
The most stand-out track on the album, worthy of the Archies, was "Sha-La Love You," for which I can't find any video footage, so here's an audio rip: