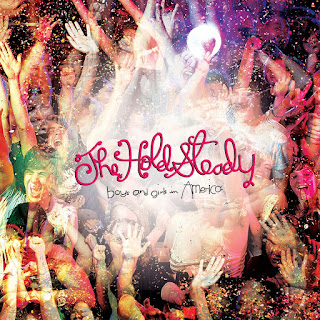 The Hold Steady are one of the more interesting and cathartic bands of the past decade and a half.  Musically, think super-tight, high-octane bar band, like Springsteen's E-Street Band at their peak, with occasional punk flourishes from the Hüsker Dü playbook.  Lay on top of that Craig Finn's hyper-intelligent slam poetry, spoken-word storytelling, like Bob Mould or Henry Rollins, but heavy on imagery and colorful characters.  Finn, who looks more like the guy you'd hire to do your taxes than one of the most distinctive indie rock voices of the modern era, weaves spoken/sung tales of lost kids and societal outcasts, getting wasted and hooking up, and makes you love them all.

After a couple solid enough albums, they really hit their stride on Boys And Girls In America, Finn rolling out a Raymond Carver anthology of lyrical genius, while the band digs in and belts out some great tunes.  It all kicks off with the anthemic "Stuck Between Stations," great guitar hooks and rollicking piano fills, and of course Finn's bold declaration of intent:

"Boys and girls in America have such a sad time together.
Sucking off each other at the demonstrations, making sure their makeup's straight
Crushing one another with colossal expectations.  Dependent, undisciplined, and sleeping late.


She was a really cool kisser and she wasn't all that strict of a Christian.
She was a damn good dancer but she wasn't all that great of a girlfriend.
She likes the warm feeling but she's tired of all the dehydration.
Most nights are crystal clear, but tonight it's like it's stuck between stations
On the radio."

This is followed by "Chips Ahoy!", one of the band's most timeless numbers, a cinematic tale of a girl who uses her psychic powers to bet on the horses, using the proceeds to get high while fighting off the resulting headaches.  It's a little like Stephen King, but with a relentlessly rousing chorus.

My favorite song, though, and this shows what a sap I am, is "Chillout Tent," the sweetest musical meet-cute love story since the Waitresses' "Christmas Wrapping," in which our star-crossed lovers both OD at a rock festival, end up at the chillout tent, and make out while everyone around them lies in comas -- never to see each other again.  Macabre, sure, but it honestly brings a tear to my eye every damn time.

Those are just a few highlights; the album is non-stop excitement, a windows-down high-volume rave-up (albeit one where sitting down with the lyric sheet is helpful).  The follow-up, 2008's Stay Positive, was nearly as great, particularly the stand-out "Sequestered in Memphis."  After some time off (and some Finn solo work), the band is back, with new (great) songs rolling out on Spotify and the new album dropping in a couple weeks.  Looking forward to it.

Here's the (fucking amazing) video for "Chips Ahoy!":
...and the video for "Stuck Between Stations":
Here's an amateur video for "Chill-Out Tent," which I think is pretty damn cute: