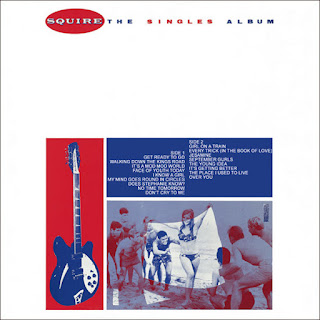 Squire were a great little power pop/mod revival outfit from the late 70s/early 80s, and while I try to focus on actual albums in this space rather than hits collections, they're definitely a band best served by checking out the singles. (I think they only had one proper long-player, 1983's Get Smart, which is terrific.)

The English band is most obviously compared to the Jam (at least that band's most straightforwardly pop-oriented tracks), with elements ranging from skinny-tied new wavers like the Jags to Big Star-oriented jangly power pop. Check out stand-out track "Does Stephanie Know," which pretty much single-handedly presages the later power pop scene of bands like Material Issue. There's an early cover of Big Star's "September Gurls" (which I think put them on the leading edge of Big Star's 80s college radio revival); jangly melodicism of the Records ("Over You"); and lots of joyous British Invasion updates like "Walking Down The Kings Road" and "Jesamine" and the pure early-60s-Beatlesque "Face Of Youth Today."

It's pretty lovable all the way through, the sort of record that has you scratching your head that they weren't huge radio favorites in the 80s.