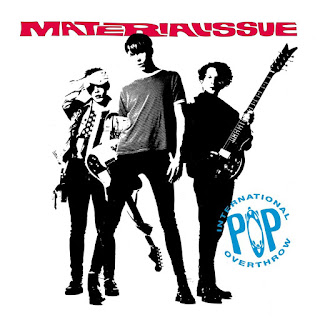 With the world again on fire, the President of the USA exhorting his white power brigade on to violence while a significant number of Republicans in the House and Senate boldly cheer on the end of democracy, urging that an election be cast aside and a leader installed by fiat based on ludicrous, repeatedly debunked conspiracy theories... well, we could use a real feel-good album about now.

Material Issue were a terrific power pop band from Chicago (and, yeah, the exuberance is tempered by the sad passing of singer/songwriter/guitarist Jim Ellison, who sadly took his own life five years later, but can we just listen to the music?). They put a little more emphasis on the power than the pop, crunchy guitars and frenetic energy, yet no shortage of ridiculous hooks. (I tend to bucket them alongside the Posies.)

Their 1991 debut is overflowing with wonderfully catchy tunes. The title track is as incisive a power pop anthem as one can imagine (its title enduring as both the name of an annual indie pop festival and an ongoing series of annual power pop compilations). "Valerie Loves Me," "Diane," "Renee Remains The Same"... damn, one bouncy, bracing noise pop tune after another, merging bubblegum and the harder rocking edge of Cheap Trick. The anniversary reissue appends a ton of bonus tracks, including some delightfully fun cover songs, and is a must-own.

The two subsequent albums didn't get quite the same attention, but are comparably wonderful (though grabbing a greatest hits collection isn't a bad way to start).