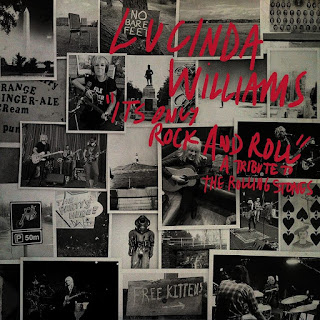 I've been a huge fan of Americana singer-songwriter Lucinda Williams ever since I saw her open for Neil Young a couple decades back. At the time, I was still pretty dubious of anything that wreaked of country music (Uncle Tupelo/Wilco and a few exceptions aside), but her scorching set floored me. Her discography is loaded with phenomenal music that can make a country convert of any rock fan; 1998's terrific Car Wheels on a Gravel Road may be the most logical entry point, full of some of her best songs.

Anyway, every musician is finding their own way to deal with the pandemic lockdown, but Williams' year-end run of live-in-studio shows was particularly noteworthy. She put on 6 nights of full-band performances beginning in late October, all thematic tribute shows. In addition to shows dedicated to Tom Petty and Bob Dylan covers, she also offered nights of country classics, soul classics, and Christmas music. She capped it off with a New Year's Eve show of Stones covers, and it's fantastic.

Not surprisingly, Williams comfortably slips into the Stones' country-tinged material like "Dead Flowers," "Sway," "No Expectations," and "Salt of the Earth." But she also reworks straight-ahead rock & roll classics from "Get Off My Cloud" to "Street Fighting Man," not to mention a riveting "Moonlight Mile." An amazing way to see out a truly terrible year.

All 6 nights are available for purchase on Williams' website; treat yourself to a late holiday gift!

This one's not from the show, but here's Lucinda singing "Happy":Also not from the show but, as long as we're here, how about Elvis Costello singing "Wild Horses," with Lucinda on back-up vocals?
File Under: 2020s Americana Live Music Lucinda Williams Rolling Stones Tribute Albums Women Who Rock