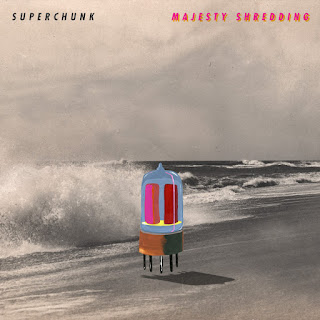 It's been a rough few weeks, right? I mean, sure, the Biden presidency finally becomes formalized, something we all knew would happen but still felt just tenuous enough in light of right wing lunacy to keep you from completely relaxing; and of course Georgia was a wonderful surprise. But we've got the assault on Capitol, and what appears to be record-setting numbers of Covid diagnoses and deaths day after day.

And when you get down, there's always that shortlist of bands and records that get you through it. I'll never (I hope) lose the thrill of discovering new music, but sometimes you need your old reliables. And Superchunk has been one of my go-to rave-ups for coming up on 30 years now.

While I'm always partial to the 90s albums that hooked me on the band, 1993's On The Mouth and 1994's Foolish and 1995's Here's Where The Strings Come In, 2010's reunion-of-sorts Majesty Shredding is right up there. After a nine-year break (following 2001's aptly-titled yet still solid Here's To Shutting Up), Superchunk, line-up intact, came up with a record that delivered far more than one could reasonably anticipate for a band that deep into their career.

The opening run of songs is as fantastic as anything from their earlier days -- hell, arguably better. "Digging For Something" kicks it off with a perfect little anthem, the band's post-punk energy tethered to the sort of earworm hooks that frontman Mac McCaughan seems to magically conjure up without fail; it's bettered by "My Gap Feels Weird," the jagged, frenetic riffs meshed against the delightful sense of joyous confusion (the title/chorus apparently inspired by something Mac's daughter said about her missing tooth, yet taking on far greater heft in context here). "Rosemarie" offers a momentary respite, a warmly tuneful mid-tempo number, with the band heading back into overdrive for "Crossed Wires," as infectious a pop-punk song as anything the band's offered to date (though maybe I'm biased because it's accompanied by one of the funniest videos I've ever seen).

Beyond the obvious highlights, the album feels inspired and relevant throughout, a consistency arguably missing from the last couple albums in the band's original run (though I don't think they ever lost the thread). They've continued kicking around since then, with 2013's similar I Hate Music and 2018's particularly angry/thrashing What A Time To Be Alive, but Majesty is one I keep coming back to when I need that kick. Buy it on Bandcamp.