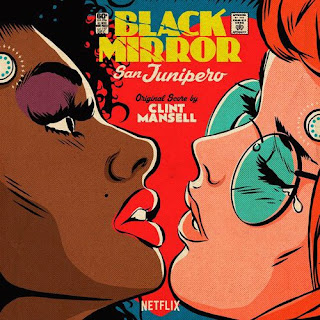 The San Junipero episode of the Black Mirror sci-fi anthology series is probably my favorite single hour of television, bar none. While the series tends to be dour, bleak, and often downright horrifying (and those are the good episodes!), San Junipero was an exception, a fascinating love story that had me in tears by the end. It still makes use of the technology hooks that permeate the series, but here (while some interpret the ending more darkly) the science serves a far more tender, generous tale.

(If you have not seen this episode yet, by all means please do so now before reading further. It's truly wonderful, and best enjoyed with as little advance knowledge as possible.)

While others have made similar playlists, I decided to make myself a more personalized CD soundtrack. The episode, largely set in the (virtual) 80s, is chock full of 80s pop and dance music, some great, some cheesy; a few songs get a fair amount of playtime, others make but a momentary appearance. A lot of the songs are not the sort of thing I have in my music collection, so it took some hunting to track them down. I subbed in a few dance remixes to recreate the show's dance club ambience, and I cheated once -- adding Janet Jackson's "What Have You Done For Me Lately," which doesn't appear in the actual show but was something director Charlie Brooker had wanted to include and works well. (Apparently they filmed a scene set to the song but couldn't get the rights, and used Alexander O'Neal's "Fake" instead. BTW, Brooker made a 42-song Spotify playlist of 80s music that further inspired the episode.)

I also omitted the non-80s tracks from the scenes where the characters venture into other decades; though serving the storyline, they sound out of place as part of an 80s-themed soundtrack. (Though I did retain the Pixies tune and "Funkytown," which don't mesh perfectly but I found worked well enough, integral to the episode without being as distracting as, say, Alanis Morissette's "Ironic.") 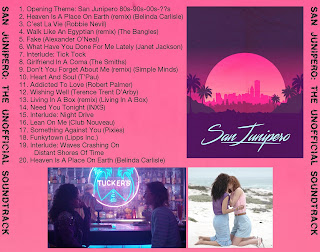 I also wove in a few instrumental interludes from the officially-released musical score (though on my CD mix I cut them down to just a minute or so each); and then segued the whole thing together so it flows nicely.

For the Spotify mix, I obviously couldn't edit the tracks or segue them together, and I used the original songs rather than the remixes for the sake of brevity, but otherwise it gets the job done. Enjoy!