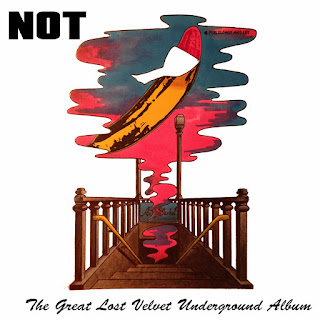 I was recently listening to (and posted here) my homemade Great Lost Velvet Underground Album, comprised of outtakes recorded during the band’s brief run and ultimately released from the vaults decades later. And that got me thinking… what might a post-breakup Velvet Underground album have sounded like?

This is not that mix. Because, frankly, a post-Loaded Velvet Underground album (a real one, not the 1973 Squeeze album recorded by Doug Yule and released under the Velvets’ moniker) would probably sound just like a Lou Reed album. And there are plenty of those. (In contrast, I’ve constructed some reasonable facsimiles of mythical post-breakup final albums by Uncle Tupelo and the Beatles, and a third Pink Floyd album with Syd Barrett.)

So, instead, I made more of a mix tape, blending solo material from Lou Reed, John Cale, Nico, and Moe Tucker (plus a couple tracks from the afore-referenced Yule record). A few of the tunes include band member collaborations – Yule backing Reed on a couple tunes; Reed, Cale, and/or Sterling Morrison (the sole member not to record any later work) helping out Tucker; Cale backing Nico; and a lone track from the later Reed/Cale reunion album commemorating Andy Warhol, Songs for Drella. I deliberately avoided using any of Reed's at-the-time-unreleased Velvets' tracks that he repurposed for his early solo LPs.

The result, while obviously stylistically disjointed (though one could say that about the Velvets' actual discography), flows surprisingly well to my ears. 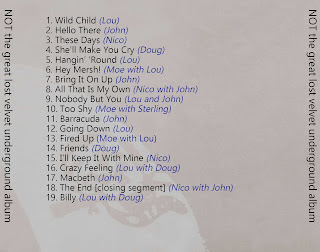 I’ve recreated the mix I burned for myself on Spotify below. It diverges slightly from my CD mix--I edited Nico’s cover of the Doors’ “The End” down to just the closing few minutes, which I can’t do on Spotify but if you start at 5:38 [“The killer awoke before dawn…”] you can replicate it; also, the Spotify version of Reed's "Crazy Feeling" is not the alternate version with Yule on guitar. But close enough. Enjoy!

(P.S. The art I used for the cover is "borrowed" from something posted online by artist Jon Owens, whose work is pretty cool.)