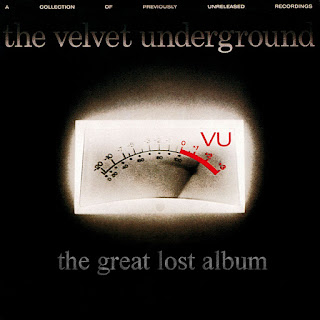 During their brief tenure, the Velvet Underground released 4 proper studio albums, each fantastic in a different way (the experimental, schizophrenic blend of dark chaos and pop on the debut album with Nico; the unleashed sonic frenzy of White Light/White Heat; the gentle beauty of the self-titled third; the bid for a more classic-rock-friendly traditional rock sound on Loaded) (and, no, we're not including the comically mediocre yet not without merit Doug Yule solo album slapped with a Velvet Underground credit). But the band also had another album's worth of material at least as worthy of attention which sat in the vaults for years, largely unheard (aside from bootlegs or the inferior reworked versions that showed up on Lou Reed solo albums).

Most of these outtakes finally saw official light of day on 1985's VU collection (with a few holdovers on the following year's Another View). They were also later repackaged (with some additional tracks and alternative versions) on box sets and deluxe reissues of White Light and Velvet Underground. A few of the tunes include original member John Cale, but most were recorded after he was replaced by Yule and intended as a follow-up to the Velvet Underground album.

While VU in its original, belated incarnation is pretty great as is, I ended up building my own version, adding in a few additional tunes from VU and the later box sets. As a solid hour of music, I think it makes for a fifth proper Velvets album that is as much a part of the band's canon as the original releases. Several of the individual songs are among the band's best (I'm partial to "She's My Best Friend" and "Stephanie Says" in particular), while as a whole it sounds like a perfectly cohesive album that would have worked perfectly as either a predecessor or follow-up to Velvet Underground.

Hell, truth be told, I listen to this far more often than the band's first two records.